16 Hilariously Stressed Out Responses To #TheCliqueIsGoingToJailParty 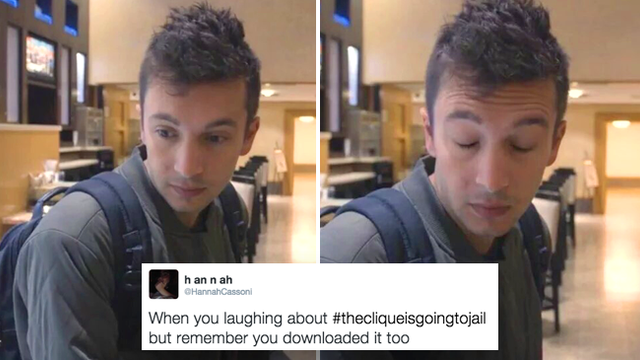 "Cop: Excuse me, have you heard this song? *Plays Heathens* Me: *Nervously sweating*"

We *think* we may have been partly responsible for a hashtag that emerged on Twitter over the weekend thanks to this whole "Heathens" mess. After we published "Are Twenty One Pilots Heading To Jail Over 'Heathens' Leak?", the Clique errupted into chaos - #TheCliqueIsGoingToJailParty began trending on Twitter in response to the legal bombshell and it was lit.

The 'Party Hashtags' have become a bit of a thing over the past couple of months (#KimExposedTaylorParty, anyone?) but this latest event is honestly the best one we've ever been to. Here's some of the best responses to Tyler and Josh's potential telling off.

It was all fun and games until a few people realised it was actually low-key serious.

joking about tøp getting sued but then realizing that it could be serious #thecliqueisgoingtojailparty pic.twitter.com/J3nT6W1gaf

I mean, the double standards that are happening in this industry are almost too much to handle.

#thecliqueisgoingtojailparty Brendon leaked a whole album he gets a cake. We leaked one song we're all arrested pic.twitter.com/QtYt1ndgIa

There's a lot of denial happening in the Clique right now.

But like seriously... what if The Clique are responsible for the leak?

the clique trying to figure out how to cover up that they contributed to the leak #thecliqueisgoingtojailparty pic.twitter.com/HKHZwVHWU3

when you change your identity // but the police finds you anyway#thecliqueisgoingtojailparty pic.twitter.com/HvcJ6MDaST

And it starts sinking in that we all might actually be responsible too.

When you laughing about #thecliqueisgoingtojail but remember you downloaded it too pic.twitter.com/72hs334Cp7

Cop: Excuse me, have you heard this song? *Plays Heathens* Me: *Nervously sweating* #thecliqueisgoingtojailparty pic.twitter.com/bm3G3h9sC2

TAG URSELF I'M 'WILL I SURVIVE IN JAIL'

Suddenly the lyrics make so much sense. Maybe this is all part of the Heathens experience?

Turns out Heathens really IS about us:
"Welcome to the room of people -- that they loved one day, locked away."#thecliqueisgoingtojailparty

OMG! You can now listen to *every* episode of the #PopBuzzPodcast right here! What are you waiting for?!

Ohhh, forget it. Let's just embrace it. What's the worst that could happen?!

The Clique that stays together, breaks out of jail together, right? RIGHT?!

Each member of the clique should say they leaked heathens then the cops won't know. #thecliqueisgoingtojailparty pic.twitter.com/YK4Wz4LEF1

At least we'll get some new merch.

And we'll finally all get to meet each other IRL!

See, it'll all work out in the end.

And once we've had enough, we'll just frame someone else for this mess.