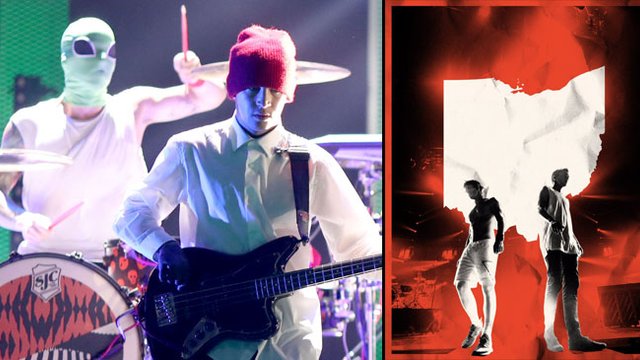 Twenty One Pilots' upcoming shows in their hometown of Columbus, Ohio aren't just notable for their tiny capacities and legions of fans ready to party alongside their heroes - they are also revolutionising the way we buy tickets online, ensuring fans don't lose out to touts and secondary sellers.

Major bands worldwide have long faced the problem of bots and scalpers buying up tickets to shows and selling them on for highly inflated prices, meaning young fans, particularly those without several hundred dollars to spend on a seat, regularly lose out.

But, in a new Vulture profile on the concert ticket industry, Ticketmaster discuss their new Verified Fan program, a presale where fans "can register ahead of sale dates by providing personal information that’s vetted by the companies. Fans then receive a code that allows them to purchase tickets and beat the scalpers at their own game."

The company have previously partnered with the likes of Ed Sheeran and The 1975 but TØP's 'Tour De Columbus' is seen as one of the most successful examples, with all five shows selling out and secondary sales at an incredibly low level. You can't get resale tickets to any of the first three shows on the likes of StubHub and, for the extra shows added at a local arena that seats around 18,000, only 350 tickets are floating around online, far less than the majority of shows by acts at a similar level.

Chris Wotman, the band's manager, praised the new system which has completely changed the way they approach touring:

"Some of this will never be able to be improved on...It’s about putting as many real fans into these venues and have them not have to pay overinflated prices. We’re gonna fight hard to keep that going."

When the Twenty One Pilots shows were announced, the band released a helpful infomercial explaining the system, and encouraging fans not to buy from unofficial places, ensuring that the skeleton clique got priority over touts in the online sale.

But, while this is undoubtedly a step in the right direction, the majority of other artists are still being forced to fight off re-sellers every time they put a gig on sale, much to the detriment of fans.

What do you guys think? How can we stop ticket re-selling online? Let us know your thoughts.