These TØP Fans Followed The Band All Summer...For A Homework Assignment! 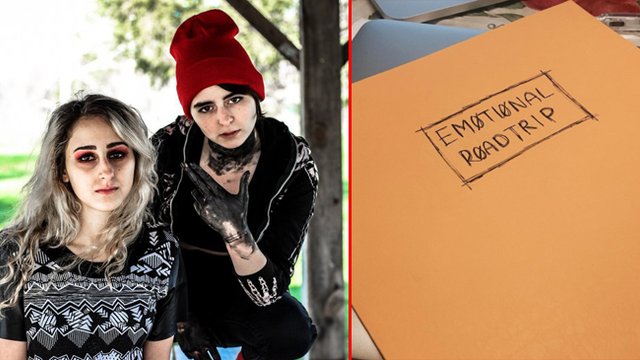 We chat to Laura VanDongen, Neam Saad and Magda Knyszynski, the filmmakers behind "The Emotional Roadtrip" documentary.

Most school projects consist of long hours in the library or slaving in the science lab in order to get that all important high grade you were looking for. But what if you could ace your class by spending the summer following Twenty One Pilots on tour, documenting the whole experience to create a top notch fan movie and wow your teacher?

Well three young TØP fans did just that and now they are sharing their work on YouTube for the whole fandom to see...

Welcome to the Emotional Roadtrip!

Diehard Clique members Laura VanDongen, Neam Saad and Magda Knyszynski set about filming their journey in search of Tyler and Josh in order to create the perfect final assignment for their film class. We caught up with them to chat through the planning behind their trip and the huge reaction its been getting from fans.

PopBuzz: So you filmed this for a school class – what was the actual assignment they set?

Emotional Roadtrip Team: It started only as an idea during our second year script writing class (around October, 2015), but some of the projects were put forward to be greenlit. We pitched our idea and basically stated that whether you greenlight us or not, we are doing this. The production ended up being greenlit, so we travelled and filmed during that summer. This would go into our “Final Third Year Production” that we had to do for our current semester that we are in.

PB: How was your teacher’s reaction to the final film?

ERT: We were pretty independent in the whole process of our production, since it was mainly just us (Neam and Laura) and our friend (Magda) from outside the program. When we showed our teachers the rough cut of the film, it was the first thing they ever saw from our production. They were completely blown away and surprised since they were unsure how it would turn out as we were left on our own in a different country with our own cameras and equipment. One of our teachers didn’t even realize that every shot (the concert shots) were ours from the audience since we had no real venue or press access. We made sure to put forth our full efforts into filming the few shows we did happen to attend. It was a really rewarding reaction to get, as they could see just how much time and effort we put into this and how it was transcribed in the final product.

PB: How did you fund the trip?

ERT: When we first got together, properly sat down to plan the trip, and realized that it was actually going to happen, we agreed to start saving from that day on as we had a few short months to pool together enough money to travel and attend select shows during the tour. Since it was a school project, we normally would’ve have access to the college’s equipment, however, in our case, since it was during the summer and we were travelling to the States we had to completely fund and equip ourselves. We saved up to buy an Osmo camera (360 camera), a zoom voice recorder, a clip-on mic, a new lens (50mm), and a couple batteries. We also had Magda’s Canon DSLR equipment so we were ready to hit the road at this point. We wanted to be able to keep it purely non-profit so we completely depended on ourselves in order to fund and create this film.

PB: How many venues on the tour did you hit in total? Where did you stay? How did you get around?

ERT: So we travelled to 9 venues (in order: Clarkston, MI. Grand Rapids, MI. Chicago, IL. Toronto, Canada. Cleveland, OH. Columbia, MD. Boston, MA. Buffalo, NY.) but only attended 3 shows, which we got all our concert shots from (other than a previous Blurryface Tour show we had attended the previous year). We went to the Grand Rapids, Boston and Toronto shows in order to get the audience footage that is seen in the film. The first night we slept in our van, parked in our friend’s driveway. After a long night, we decided to forgo the original plan and for the following shows we stayed in cheap, sketchy motels. We travelled using Laura’s old family minivan, which we nicknamed Bartholomew as one should when starting an adventure. It miraculously survived the whole trip, minus some slight hitches.

PB: Any memorable reactions when you were talking to the fans? Fave fan art or costume that you saw?

ERT: Everyone that was on camera proved to be unique in their own way, sharing their own stories that revolved around twenty one pilots. It never felt repetitive to us in any way as each fan had a unique experience with the band. We think that the people that stuck around with our project, continuing to show interest through our social media, even after we moved on to the next venue, were the most memorable. We truly believe and were even surprised that each person brought such personal, new, and interesting stories to share with us. From the little things, like song interpretations and meanings, to the larger deep life stories, each interaction was unique and touching. We were truly able to see first hand how a band impacts their fans on such a personal level. It was really cool seeing everybody wearing the red beanies or painting themselves like blurryface, recreating Josh’s red eye makeup or even their tattoos. We tried to show this as much as possible as twenty one pilots fans have shown so much dedication with the bands rise into global fame. As fans of the band, we loved being in that environment where everyone felt comfortable to dress how they wanted knowing that the same band influenced all the other fans in a similar way.

PB: You talk about being inspired by Mark’s (Eshleman, regular video collaborator with the band) work as creative director – what is it about his work you love so much?

ERT: The reason that this film was even brainstormed was that as students in the media industry, Mark’s twenty one pilots highlight reels were always something we always looked forward to seeing and analyzing. Where fans would stay updated with their favorite band on the new dates of each tour, Laura and Neam would also be looking at the shots and interview techniques, thinking, “wow, this style of shooting is sick!” We thought it was super cool and something we could draw a lot of inspiration from, by attempting it in our own way. We know he does most of their music videos as well, which obviously takes a lot more skill and effort to accomplish, but we started with his unique documentary style.

PB: What are your career ambitions?

ERT: After going on the road and following a band something finally clicked, and we knew this is something that we want to be a part of. We realized that ideally being in the music industry to be able to film and be a part of something we are passionate about. We love music, being in that atmosphere is something we knew we were meant to take part in. This is our third and final year at Mohawk College for TV Broadcasting and we are currently looking for internship placements and are scared for the future, like any person branching out in their career. We want to be able to go into media for music, which isn’t something our program necessarily specializes in. Magda is focusing her endeavors towards publicity or advertising as she’s finishing her degree in Communication and Media Studies at Carleton University. We made this documentary happen, despite the obstacles we encountered along the way, but that didn’t matter to us and we decided that we’d pave our own way and hope for the best.

PB: Did you approach Tyler and Josh for an interview?

ERT: We originally attempted to contact them via their publicist, but didn’t get through, just as we hadn’t gotten any access for venues. We went into this with pretty low expectations judging on how strict venues are and how busy the band must be so we weren’t dependent on getting a real interview with them. Our main intent for the whole documentary was based solely around the boys’ impact on their fans. In a way it worked out pretty well for us that we didn’t have an interview with the band, since there is no way describe what the fan base is like, other than from the fans themselves. Having Tyler and Josh in it may have even taken attention away from that.

PB: How have Twenty One Pilots inspired you?

ERT: All we can say is that we wouldn’t have travelled this far, self-funded and attend 3/9 shows for any other band. They have inspired us in many ways; them as the down to earth people they are and the type of community they have created. At the very end of The Emotional Roadtrip, you’ll see we thanked Tyler and Josh for everything because ultimately our whole production is all because of them. There wouldn’t be a film without them and their impact. We are big fans of the band and that has a lot to do with the whole story behind the Roadtrip. We had our doubts to create a project like this as our first ever production, but we created it because of their motivation to ‘do what you love’ and to find purpose and, as cheesy as it sounds, believe in ourselves. We think they inspire us like every fan of theirs is inspired. These two boys came from Ohio and took over the world with their compelling message, and that gives us that little bit of hope to strive for something big too. We would love to create more content about them, and would love to work directly with them if given the chance. Because of who they are, we have grown pretty confident in believing we could have a future working in the music industry as cinematographers, or who knows, even tour with the next up and coming band.

The Emotional Roadtrip is available to watch on YouTube now - or check it out at the top of the page.