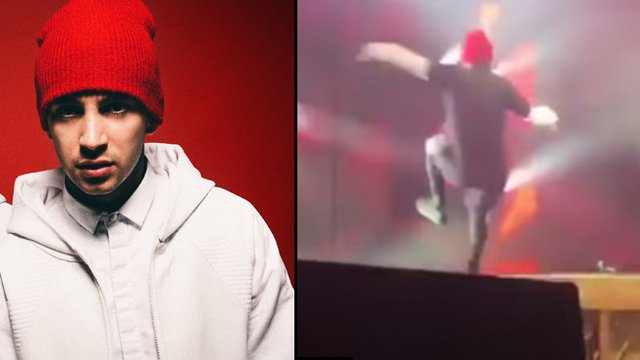 Tyler took a dive in the middle of his set at Hangout Festival but recovered like a pro.

Tyler Joseph turned a slightly embarrassing on stage slip up into an epic recovery at a recent festival show when he fell off a piano in the middle of a song.

The Twenty One Pilots frontman was performing 'Holding Onto You' at Hangout Festival when he went to do his usual stage move of jumping over his keys but seems to have misjudged the positioning as he went flying over the back landing straight on his bum. Bless him.

But, being the professional that he is, Tyler got straight back up and carried on with the song. Because that's just how he rolls.

Check out the video evidence of the incident in the clip below:

HE WIPED OUT AND STILL FINISHED THE LINE WHAT A CHAMP
(don't worry about the fall he was fine he laughed it off) pic.twitter.com/LJv2TZSYrR

Twenty One Pilots will soon wrap up their epic Blurryface era with a series of homecoming shows in Columbus Ohio.