The wait is over. After months of anticipation, Twenty One Pilots have now released their highly anticipated fifth studio album Trench. The 'Stressed Out' duo announced the project back in July and, since then, they've dropped four brilliant singles. Not only that but they've also put out a trilogy of stunning music videos ('Jumpsuit', 'Nico and the Niners', 'Levitate') that introduce us to the Trench universe.

TØP are known for their well thought out eras and Trench is no different. First things first, Tyler and Josh have created a new world to accompany it (from the city of Dema to the Banditøs, they've exceeded themselves). Then there's the fact that, just like Blurryface, this record has its own colour scheme (yellow is the new red). Oh, and the boys kick off The Banditø Tour in mere weeks.

Taking all of this into consideration, it should come as no surprise that the album slaps. From the more lowkey personal cuts like 'Leave the City' and 'Neon Gravestones' to the epic numbers like 'The Hype' and 'Morph', TØP are not playing. Trench also sees Tyler and Josh explore topics like mental health. It's only just come out but we reckon that it could be their best album yet.

Unsurprisingly, fans around the world are shook. Ever since the LP was made available to stream and purchase at midnight last night, the skeleton clique have been listening to it on repeat and taking to social media to make their thoughts known. To top it all off, they've also been making memes and they are hilarious. Here are just a few of the best.

Some are just obsessed with it.

Don't worry. We are too.

Others are just proud of Tyler and Josh.

I FINISHED LISTENING TO TRENCH AND I JUST WANTED TO FUCKING SAY THAT SHE FUCKING SLAPS I'M SO FUCKING PROUD OF TYLER AND JOSH THEY NEVER DISAPOINT ISTG #TRENCH pic.twitter.com/yvjlgrHeYl

They've outdone themselves with this one.

It's an album to play at full volume.

I’m listening to #trench and it’s the album of my life pic.twitter.com/IXpvDKT7uk

We're getting all of the feels.

A few people can't get over the transitions...

#TRENCH the switch from Smithereens to Neon Gravestones pic.twitter.com/Bkr8G71Aqi

That one was a lot to process.

...actually a lot of people can't get over the transitions.

There are so many good ones.

Then there are those who are struggling with the album's topics.

LISTENING TO LEGEND WHEN YOU REALIZE ITS ABOUT HIS GRANDPA THAT PASSED AWAY #TRENCH pic.twitter.com/LqZ1a3AYFc

It's emotional to say the least.

Tyler even gives a moving shout-out to his fans on 'Pet Cheetah'.

“this clique means so much to this dude, it could make him afraid of his music, and be scared to death he could lose it”

'Smithereens' is really getting to people.

Me when I listened to smithereens and realized it’s about Jenna: #TRENCH #twentyonepilots pic.twitter.com/JePXuXoj1z

Tyler didn't have to melt our hearts like that.

And last but not least.

Tyler and josh watching the clique freak the fuck out over trench #TRENCH pic.twitter.com/Owvazp4rQu 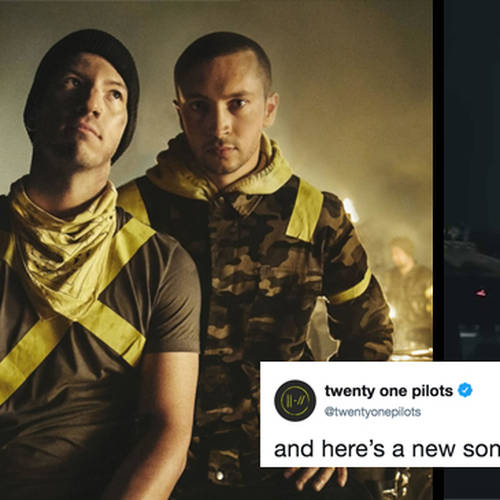