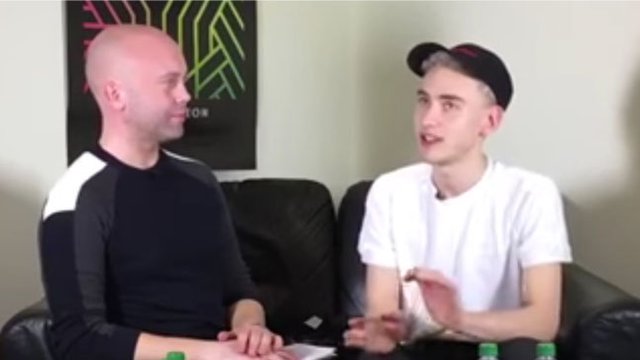 We've written before about how wonderful we think Olly Alexander is.

He's spoken out about using male pronouns in pop songs. He's revealed his battles with mental health, in particular anxiety and depression. He also used the video for "Desire" to explore non-binary gender identities, giving a much needed to platform to those who don't fit within the cis-gendered notions of male and female.

Olly made another frank admission on Friday, before the band played to 12,000 people at Wembley Arena in London, the biggest show of their career to date.

Speaking to Buzzfeed, he described how he became fixated with his body image and food as a result of dealing with depression and anxiety, as well as his parent's divorce and coming to terms with his sexuality.

The problems began when he started attending a local gymnastics class when he was 10 years-old. "It was the first time I was starting to have an awareness of my body and strength and [thought], 'Older boys, they’re really muscly and they could do things that I couldn’t do’ and that’s the point, from then onwards… I started to have body issues and not eating, like I wouldn’t eat.”

"I was stuck between this place of being really, really, really skinny and hating it – because I wanted to be muscly like other boys – but at the same time didn’t want to put on weight because that was bad as well. I struggled with it for a really long time actually."

For over 10 years, Olly would skip meals or obsess over what he was eating. It was, in part, an attempt to feel more in control. He stopped short of saying he had an "eating disorder". "I wouldn’t want to call it that myself… I was never diagnosed with an eating disorder but I definitely had a difficult relationship with food."

Eventually his relationship with food improved thanks to a good support network and therapy, which help him address some of the root causes of the problem, not just with body image but also anxiety and depression. "It’s really a life-long process...I think anyone that’s experienced any mental distress or mental illness knows it’s something you manage – it’s not something that just goes away. So it’s an ongoing thing."

If you've experienced similar things to Olly and you'd like to read more about it, we'd recommend you head here.

And you can watch the full interview below: