This time, Azealia Banks is carrying on multiple feuds at once. Currently, she's got Zayn Malik, Skai Jackson, MNEK, and Radio 1Xtra DJs, Jamz Supernova and Target in her crosshairs.

Here's how this whole mess erupted into one of the worst Banks rants we've ever seen. 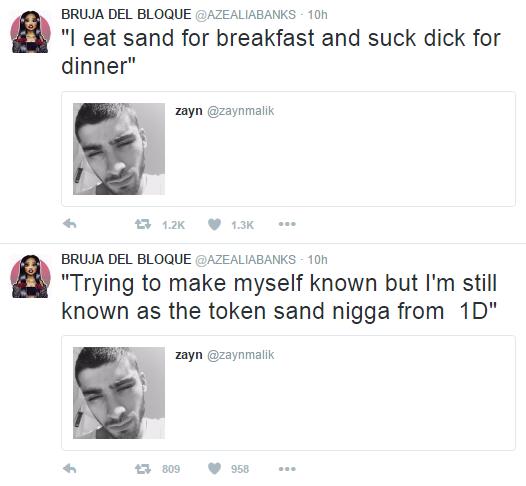 Azealia accused Zayn of plagiarizing ideas from her in his latest video, "Like I Would". Zayn subtweeted a casual denial and Banks responded to a Zayn selfie with some really horrible slurs. It's unclear whether or not Zayn and Azealia know each other in real life, but Banks did mount the allegation that Zayn had given out her cell number to his fans.

Azealia noted that verified accounts started mentioning her and she wasted no time in going after them one by one.

Azealia Banks needs to simmer down a little

will azealia shut the fuck up already?

Somehow, 14 year old Disney Channel star, Skai Jackson got caught up in the mess and things got particularly nasty. Banks referred to Skai as a "lil black bitch" and a "thot" while body shaming and sex shaming her. Yes, sex shaming a 14 year old.

@AZEALIABANKS why you been saying nasty things about me ? I wasn't talking about you lol ?

Azealia Banks then took to Periscope to reiterate her tweets in video form.

Look how this big hardback ooman @azealiabanks is behaving on periscope: https://t.co/llZWiFe28K

Azealia, who just released a video for "Big Big Beat" (a song that many were hoping would signal a comeback for Banks), has been relentless in her attacks. I mean, for 12 hours straight Banks tweeted terrible things to everyone under the sun.

Despite Azealia's belief that no one has supported her in her career, the controversial musician has been given so many opportunities as an artist. That Banks is even able to make music at a professional level when she has acted as the biggest saboteur to her own career is beyond astonishing.

I think it's time we leave Azealia Banks behind.

Racism, misogyny, homophobia, and erratic attention seeking behaviour are all her calling cards. How ever good the music is and however much "potential" Banks has, she is clearly a person who cannot be included in any progressive music culture.

Black women have so many important stories and narratives to speak from but Azealia's attitudes tarnish a perspective that is so often ignored by the mainstream.

While we should all hope and wish Azealia is able to tackle her triggers and live up to her potential, it would be a mistake to keep supporting someone whose thoughts and opinions are harmful in every way imaginable.