Zayn Got A New Tattoo, & The Internet Has Some WILD Theories On What It Means 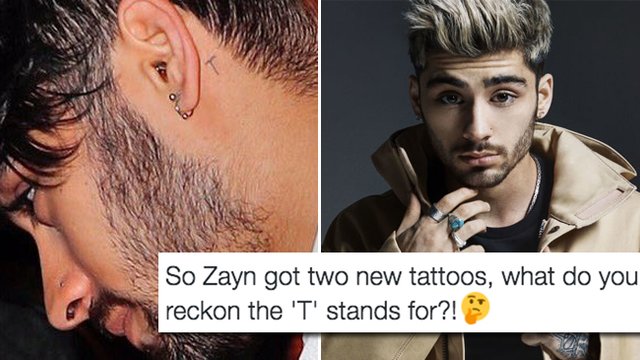 Zayn Malik, the artist formerly known as "Zayn from One Direction", stepped out with a couple of shiny new tattoos this week, including a small 'T' behind his ear area.

But we needed to know - what does the 'T' stand for?

So, we asked you guys for some ideas on our Twitter page...

So Zayn got two new tattoos, what do you reckon the 'T' stands for?!pic.twitter.com/kz5M8yJmCo

...and you certainly came through with some truly outlandish theories!

First up, there were the obvious One Direction fans, hoping this was a sign that they should meet up, clear the air and get the band back together.

it stands for take me home aka the best one direction album https://t.co/JtPhxgcVVg

T for TWhat a Feeling hit song by 1D https://t.co/sSIJbIX5J1

(af)Ter five incredible years Zayn Malik has decided to leave One Direction. Niall, Harry, Liam and Louis will continue as a four-piece and https://t.co/rcgsWAzPDL

Well, we think that's what they meant anyway...

Then there's the 1D shippers, endlessly searching for the truth.

Lots of people ended up plugging this undisputed banger:

the real question is: when is he gonna add the other T https://t.co/nYO3DysGN4

Can't confirm whether Zayn's heard it though...

These ones were pretty mature.

But most people seemed to think Zayn was paying tribute to his fave artist, whoever that may be...

"Touch It" is the thirteenth track from Ariana Grande's third studio album, Dangerous Woman. And it's featured as a remix in the new Final F https://t.co/twErjXXGKp

Tyler Joseph (born December 1, 1988) is an American musician and rapper. He is the lead vocalist for the American musical duo Twenty One Pil https://t.co/FdUoHMFzvg

We're sure he's a fan of all of them really guys.

But, at the end of the day, there can only be one winner and we think we have been able to identify exactly what Zayn's 'T' stands for.

No more debates - this is the one.