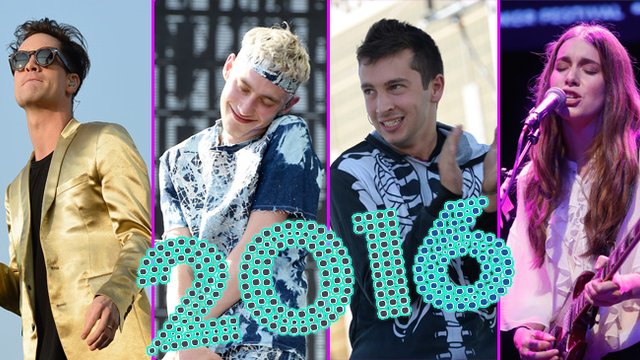 From Troye to Years & Years, 2016 has seen some serious dedication to the art of the cover...

But which cover was the best? We ranked our top 11 for you to argue over/make a playlist of to listen to at your leisure. So, let's round up the top covers of 2016 shall we?

11) Ashley Tisdale - Still Into You

10) Against The Current - Water Under The Bridge

Adele has never sounded so good. Fueled By Ramen's latest signing made their name with inventive YouTube covers and this offering is no different, putting their own spin on one of 25's standout tracks.

Paying tribute to her 'The Feeling' collaborator, Halsey is clearly feeling a lot of Justin's latest album, not only gifting us with this fresh take on the well-worn single but also heading out on tour with the pop giant next year.

Bastille were already storming their Apple Music set in celebration of second album Good Grief when they decided to up the ante even further by bringing out the legendary comeback king of 2016 Mr Craig David. Their joint take on this classic dance tune made our night at the Roundhouse truly LIT.

Dua Lipa has just completed a tour of the US supporting Troye and her influence has clearly been rubbing off on him, Troye delivering this minimalist take on the summer banger during a live show.

The original is clearly one of the best songs released this year but hearing this tale of sexual jealousy and loss from a female perspective gives it a fresh new sound that Matty would be proud of.

Known to be huge Prince fans (they even briefly performed with him at the SNL 40 after-party), Haim chose not to go for a sombre 'Purple Rain'-esque obituary, instead turning up the funk for an energetic blast of '80s synth pop. Plus, those guitar-swinging dance moves are on point!

This perfect tribute to her friend, the late David Bowie, saw Lorde gain plaudits worldwide for her understated and emotional performance of what is arguably his best known song. Not an easy task to live up to but she nailed it.

One of the undoubted highlights of the Emotional Roadshow was Tyler and Josh's pop medley, tackling all manner of songs, from Justin Bieber and Celine Dion to House Of Pain, often with their various support acts in tow. When you are a band unrestricted by genre, there's no limit to the number of artists you can cover.

2) Panic! At The Disco - Bohemian Rhapsody/All You Pretty Things

Brendon finally hit the studio to record a version of the longtime set favourite for the soundtrack to the most disappointing movie of 2016, Suicide Squad. However, one of our live highlights of 2016 was seeing the band run through their cover with an added snippet of 'All You Pretty Things' in tribute to David Bowie, made even more poignant by the fact that we were in Brixton, the area of London he long called home.

These boys clearly deserve an award for services to cover versions. Not content with slaying last year's Jingle Bell Ball with their take on Britney's 'Toxic', Years & Years have upped their game in 2016 to tackle all manner of insane musical tributes.

First up was their R'N'B moment with MØ on 'The Boy Is Mine' at Wembley Arena.

Then they brought the party vibes with their highly skilled mash up of 'Hotline Bling' and 'Dark Horse'.

And finally, just last night (December 12th), the boys brought out actual Spice Girl Mel C for an Xmas singalong to the Number 1 smash '2 Become 1' and the Bryan Adams duet 'When You're Gone'.

Olly's excited fanboy freakout face automatically shot this to the top of our list.

Any other covers you've loved this year? Add them in below.