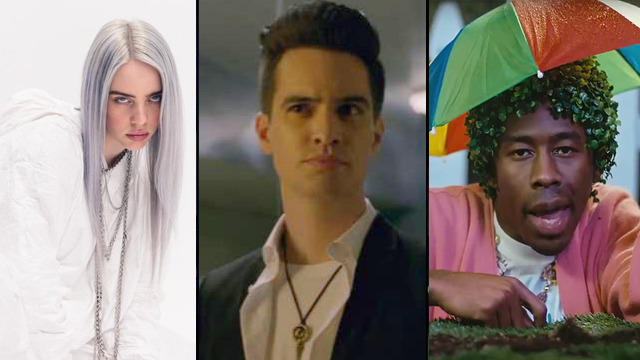 From Troye to FOB and everything in between, let's round up all of the finest vids of the year.

Another year, another shedload of impressive "visuals" to accompany all your favourite bangers. 2018 has been nothing less than perfect when it comes to music videos. From videos with tons of guest stars and cameos, to videos with more pop culture references than you can shake a stick at, big visuals and big budgets are back in a huge way.

Take a look below at all the best music videos of 2018 so far:

Drake - 'In My Feelings'

Ariana Grande - 'God is a woman'

In this video, Ariana: fingers a hurricane, swims in a pool of paint that looks like a vagina, pays homage to famous renaissance art, lets a group of men suckle at her udders, has Madonna quoting Pulp Fiction as she smashes the glass ceiling in the Pantheon which famously doesn't even HAVE a ceiling AND recreates the 'Creation of Adam' which herself as God. Video of the year.

When Halsey and Lauren Jauregui dropped the visually stunning and long-awaited video to the LGBTQ banger 'Strangers', the internet went WILD. Starring as star-crossed lovers Luna and Rosa, Halsey and Lauren battle it out in the ring in a heartbreaking yet ICONIC sequence that is surely the shining jewel of the HFK series.

Brendon Urie as an x-rated Avenue Q type puppet, snorting coke and throwing up on people, is everything we never knew we needed.

Four legends. Visually stunning. A giant holographic Cardi B. What's not to love?!

Imagine having the power shut down one of the busiest and most famous museums in the entire world. They did that. Our parents did that. And they produced a masterpiece of their own.

Selena Gomez - 'Back to You'

Selena's Wes Anderson-esque video for 'Back To You' is several miles outside of her usual music video style but it's a welcome change. And it's cute AF.

The remix of Tove Lo's ode to unapologetic female pleasure sees Tove Lo, Charli, Icona Pop, ALMA and Elliphant turn their hand to sex therapy for a straight couple. Highlights include ALMA's acting, the return of 'it's Charli baby' and Tove Lo instructing a man how to... ahem correctly use his tongue. This is not simply a music video, it's a public service announcement.

Troye is the very definition of serving looks in this music video, which is a 4 minute visual feast of colour and couture. 'Bloom' finds Troye reaching a new artistic peak and we're stanning all over again.

Petition to cast Cardi B in Kill Bill 3. Honestly, you don't wanna fuck with this bride.

Maroon 5 pulled it out the bag with the video for this female empowerment bop that featured over 30 cameos from activists, models and Olympians to actress, musicians and babies. The highlight? Adam Levine's wife Behati Prinsloo and their daughter who featured right at the end.

When Nicki released 'Chun Li' and 'Barbie Tingz', it was clear which video she spent most of her budget on... it was this one.

She's been called out for copping Teyana Taylor's aesthetic in Kanye's 'Fade' video but the problematic Azealia served up another truly iconic bop with 'Anna Wintour'. And visuals that we'll never forget... mainly because those prominent (fake?) nipples have been burned into our retinas.

Childish Gambino - 'This Is America'

Donald Glover Beyoncé'd this drop straight out of nowhere. The song alone is great but the video... we were honestly not ready.
This brave and brazen video dares to broach the issues that America is facing at the moment, in a way that stays with you long after the song ends. We love a woke king.

While 'Accelerate; received mixed reviews as a single, the public were unanimously agreed that Xtina's new aesthetic for this era is ON POINT. What greater move than to be known of your heavy make up looks and controversial outfits, to then return with nothing but a bare face and attitude?! ICONIC.

Christine and the Queens - 'Girlfriend'

It's like West Side Story, but there's only one gang and the whole movie is set at the top of an unbuilt skyscraper. It's perfect.

Creatively developed by Zayn himself, the visuals for 'Let Me' serve as a sequel to 'Dusk Till Dawn'. But the real question is: when are getting the full movie version of this? Honestly, waiting months at a time for the next instalment is doing nothing for my health.

This video is the equivalent of the big fancy dress party in 'Romeo + Juliet'. Halsey, clad in what can only be described as the GREATEST CATSUIT OF ALL TIME, struts around the mansion looking for her bae from the 'Now or Never' video before bumping into Big Sean and Stefflon Don. Where was our invite?

The category is: 90's Blind Date x Fresh Prince Of Bel Air realness. We wanna go on a surfing date with Baelani now.

Shawn Mendes - 'In My Blood'

What could initially be written off as an overly simplistic video is elevated by its clever use of special effects and utilisation of one shot camerawork. The subtle references to Shawn's flower covered album artwork and lyrics throughout make 'In My Blood' a powerful watch.

Two of the most soulful voices collide on this dark and cinematic bop. The visuals are truly *Monique Heart voice* S T U N N I N G and perfectly integrate surreal visual effects to create this seemingly one shot masterpiece.

Ariana's must anticipated return to music was accompanied by what is probably her most visually stunning video yet. Directed by Dave Meyers (who also directed Kendrick Lamar's 'Humble' video), it's easy to see how the visuals are so strong.

Drake's ode to female empowerment in the digital age is both refreshing and important. It helps that the song is a bop, and the video features a range of women owning their femininity and being absolute baddies. Nice one Drizzy.

WARNING: This video may potentially trigger seizures for people with photosensitive epilepsy. Viewer discretion is advised.

The video for 'OKRA' makes use of tight shots on Tyler spitting his lines against split screens of wide shots in highly saturated , lucid landscapes and setups. Just in case 2017's 'Flower Boy' gentle and nuanced album made you forget, this is proof Tyler can also still go HARD.

Is this the song of the year? Probably. But with an equally smooth video that goes OFF just at the right moments, this is also a hot contender for video of the year.

So, 'Delicate' caught some heat for being an almost frame-for-frame remake of the famous Kenzo perfume ad but you know what, it's still a bop and it's still nice to see Taylor's sense of humour shine through. SO THERE.

Tommy Wiseau in a neon-lit diner... what more do you want?

Seriously what was the budget for this?! Special effects on 10, Brendon murdering a bunch of people, an mysterious key storyline and a secret link to previous music videos make this a comeback video we can analyse, gif and bop to in equal measures.

Self proclaimed ‘king of the youth’ hits us with a sun tinged video feating a cameo from Bhad Bhabie and a great selection of overalls.

Has Iggy been listening to 'Hopeless Fountain Kingdom'?! But regardless of coincidental or not thematic crossovers, this neon dripping visual pays a damn good homage to Luhrmann's iconic 'Romeo and Juliet' too. And we stan a lil' bit.

Following the narrative of the Baz Luhrmann-inspired 'Hopeless Fountain Kingdom', 'Sorry' picks up after the intense shoot out at the end of the 'Now Or Never'... sans blue wig, of course.

The music video that broke twitter the most in 2018. Top YouTube comment: ‘THIS VIDEO MAKES MY BISEXUAL SENSORY SYSTEM GO INTO FULL OVERLOAD.’ HAVE YOU EVER READ ANYTHING MORE ACCURATE?!

The weather forecast is sunny with a chance of Paramore.

me: *adds Drake to this list* *God's Plan Starts Playing*

All the aesthetic beauty of ‘Black Panther’ combined with Kendrick’s signature progressive music video visuals make this team up between SZA and Kung Fu Kenny a work of art in itself.

Dare we say, they took it to CHURCH on this one. Also where can I get a neon coffin?!

This video features animated cereal boxes, Tyler The Creator dressed up as a front lawn and a hibiscus adorned wig that would make Valentina and her Diana Ross look quake in her boots.

FUN FACT: Taylor Swift filmed 'End Game' is London, Miami and Tokyo. In the London scenes of the video, Taylor hit up The Bull & Gate pub in Kentish Town and the Kentish Delight kebab shop. Iconic.

Black and white realness with a wind machine powerful enough to knock you off your feet, Troye ushered in his new era in real style.

Packed full of fan references and with a working FOB-themed phone line to boot. Bonus points for bringing back Patrick's 'Dance Dance' outfit too.

Colourful, with a killer dance routine, and absolutely driiiiiiipping in 1990s nostalgia. Who do we have to call at Netflix to get this video adapted into a sitcom?

Picture this: The year is 2028. Dancing robots have taken over the world thanks to Justin Timberlake dressed as Steve Jobs. This is literally the most terrifying Key Note speech of all time.

Migos playing a high-stakes game of Mahjong in an underground lair somewhere in China with Pharrell Williams? 10/10, would 100% watch this version of Kill Bill.