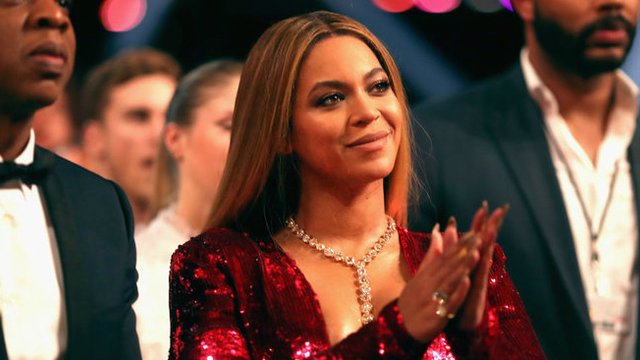 Last night's shock Album Of The Year result is part of a long history of black artists losing out.

You know something's gone amiss when even the recipient of one of the most prestigious awards in music isn't too sure she deserved it. But that's exactly what went down at last night's Grammy's when Beyoncé's Lemonade lost out to Adele's 25.

"I can't possibly accept this award," Adele said, visibly shocked - as millions of others were - at the decision. "The Lemonade album was just so monumental, Beyoncé. It was so monumental and well thought-out and beautiful and soul-bearing... we appreciate that." She added, "All of us artists here adore you. You are our light," before her trophy accidentally broke in two, suggesting that the universe was not okay with this turn of events.

Adele's acceptance speech: "Beyoncé's album was so monumental." Humble queen. Give them all of the awards honestly. pic.twitter.com/sbf0w8mEbx

But why should the most critically acclaimed album of 2016 lose out to an admittedly great album, but one that in comparison to Lemonade, is more or less the same song 11 times? Looking through recent Grammy history, a pattern starts to emerge that suggests the problem is bigger than any one artist.

Adele is just a G. Broke her Grammy in half to give the other half to Beyonce. Legendary. pic.twitter.com/Js7MKqJ6XW

In 2013, Frank Ocean's Channel Orange, an album which spoke openly about same-sex love and in doing so helped push the long-stagnated conversation about homophobia in Hip Hip and R'n'B, lost out to Mumford and Sons' Babel. The following year, Kendrick Lamar's universally acclaimed album Good Kid M.A.A.D city lost out to Daft Punk's Random Access Memory.

Then, in 2015, Beyoncé's world-stopping self-titled fifth album lost out to Beck's Morning Phase. At the time, many argued that because Beck played such a major role in making the album, including playing 19 instruments on it, he deserved to win despite Beyoncé enjoying greater sales and cultural impact with her album.

And that just about made sense until Kendrick Lamar's fiercely political, creative and universally acclaimed album To Pimp A Butterfly lost out to Taylor Swift's commercially successful but clearly less accomplished 1989 at the 2016 awards - a decision so shocking that 2013's jilted artist Frank Ocean called it out in a Tumblr post yesterday. How could an album like 1989 beat something like To Pimp A Butterfly, when just 12 months before than an album like Morning Phase beat something like BEYONCÉ?

It's impossible to prove, but it seems as though the goalposts each year are moved to give white nominees the greatest chance of success. When Black artists submit an album with record-breaking sales, voters want total artistic ownership. When black artists submit an album that demonstrates total artistic ownership, voters seem to be more interested in global sales. This tweeter seems to think it's got something to do with working with Ryan Tedder, however considering the Ryan Tedder-written and produced 'XO' was on the album that lost to Beck in 2015, its more than likely that being a white artists gives a little added boost.

That's the worst case scenario. What's more likely (though equally frustrating for artists who lose out), is that the Grammy voters just don't understand everything that black artists offer in their work. While Lemonade was, on the surface, about being cheated on, it was also about being a black artist in a white-majority industry, the kinship that black women feel with one another, the grief that black mothers experience when they lose their children to police brutality. It referenced centuries-old West African mythologies and the history of black people in the Southern States. It did more as an album than 25 ever could, but perhaps Grammy voters didn't feel that Lemonade was deserving because it spoke to a set of life experiences that they couldn't connect with.

This would also explain how Lemonade wound up winning Contemporary Urban Album Of The Year, despite it not being a particularly urban album, or how Drake's 'Hotline Bling' won Best Rap Song, despite it containing no rap. There's clearly a problem - the people who decide who should win what don't always know what to do with art from black creators.

So how do we make sure that diverse artists are given the recognition they deserve at the Grammys? The most important step is to look at and improve on the diversity of Grammy voters. If the Grammy's want to be the authority on musical quality, they need to make sure the people who vote can understand the music that's being presented to them.

People also need to take a leaf out of Adele's book and speak out when the decision is so clearly wrong. And it has to be white artists as well as black artists that do so. A black artists can't speak about the bias they face without being accused of making it personal. Just look at the speech Kanye made when he interrupted Taylor Swift at the 2009 VMAS. That moment has been characterised as an attack on Taylor, when really it was about black music being ignored (lets face it, Beyoncé's 'Single Ladies' was THE only choice for Female Music Video that year). Similarly, when Nicki Minaj tweeted her dissapointment at Anaconda being overlooked at the 2015 VMAs, it didn't take long for her frustration at being yet another black woman whose art is overlooked to be turned into an attack on Taylor Swift.

@NICKIMINAJ I've done nothing but love & support you. It's unlike you to pit women against each other. Maybe one of the men took your slot..

That's what makes Adele's reaction last night so important. She acknowledged her privilege, and used it to make a stand for music, even at the expense of her own celebratory moment. When she said "What the f*ck does she have to do to win Album of the Year," she was pointing out the extra effort that all black artists have to put in, just to lose out to music that isn't as accomplished.

@Adele crying, @Beyonce crying, I'm crying, you're crying, we're all crying. #GRAMMYs Best speech ever by an Artist for an Artist. #hello pic.twitter.com/t7iPkzIsmL

The Grammys, like the Oscars, are slowly improving when it comes to recognising diverse music. But while diverse artists who are pushing the industry forward are failing to be recognised, nobody who cares about music can afford to stay silent.