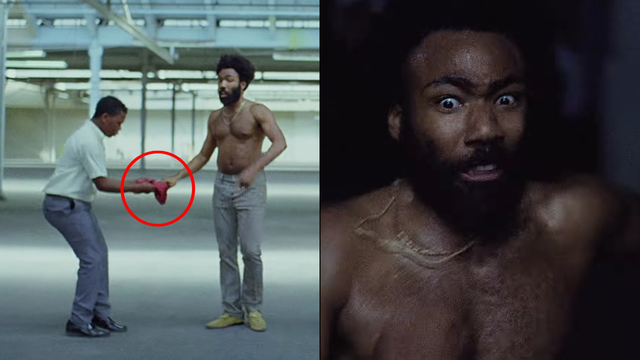 The messages and themes in Childish Gambino's 'This Is America' are so deep.

Childish Gambino is one of the most multi-faceted artists of our generation. A writer, a musician, an actor, and a director, Donald Glover's endless hats have opened up meaningful discourse across many genres. His latest table-shaking pop culture moment comes in the form of the music video for "This Is America".

A nuanced and, at times, jarring look at the black American experience, its many hidden messages have inspired intense debate over the complex visual and lyrical themes.

One of the more subtle visual cues, the Confederate-style trousers are visible in almost every scene in "This Is America". In US History, Confederate soldiers fought to keep slaves from being freed, ultimately losing out to Union forces in 1865. The trousers are, perhaps, a nod to this time period, a subtle but persistent reminder of America's complicated relationship with Confederate monuments and the remnants of slavery.

Lyrically, this turns the lens on the spectacle of musicians who make partying and money a central theme of their art. "Party just for you" and "money just for you" parallel one another because black culture is often commodified, packaged, and re-sold for general consumption. Therefore, it is not "for us", but rather "for you".

3) The symbolism of carefully placing the guns into a red cloth.

Here we can take the carefully handled weapons to symbolise the way guns are protected and lionized by the American south (the "red states"). Even after causing such destruction, the weapon is gently and carefully placed inside the bright red cloth for safe keeping. The havoc it has caused is never acknowledged in the video.

4) Dancing as a distraction

Amid the chaos that takes place behind Donald Glover and the kids, the viewer's attention is always drawn to the forefront of the shot where the youngsters are performing the latest viral dance moves.

This can be taken as a critique of modern internet culture which often allows viral dance videos and other distractions to shift our focus from the important issues. We see burning cars, bodies being dragged away, and symbolism of "the end of the world" and yet our focus is forcibly dragged back to the distracting dance moves at the forefront.

5) The horseman of the apocalypse

We know this is likely a reference to the four horsemen of the Apocolypse because of the colour of the horse which is mentioned as "white" in the bible.

"So I looked and saw a white horse, and its rider had a bow. And he was given a crown, and rode out to conquer and defeat." - Revelations 6:2

6) Donald Glover shooting the choir is a reference to the June 2015 Charleston church shooting.

In 2017, Dylann Roof pleaded guilty to the shooting deaths of 9 black church-goers in a Charleston, North Carolina parish. This imagery is believed to be referencing this tragedy.

1. The kids in the balcony are recording all the mayhem with cell phones (that's a celly) which has been a "tool" to capture incidents of police violence and broadcast them.

2. Throughout the video, Donald Glover has been inside a structure that looks similar to a prison cell (a celly). Many have likened the prison industrial complex to a "tool" used to transfer the idea of forced bondage into more a "palatable" 21st-century construction of slavery. (see Ava Duverney's 13TH for more on this)

3. This may also be a reference to the shooting deaths of individuals carrying cell phones (a celly) which police believed to be guns ("tool" is also a slang word for gun).

8) The juxtaposition of the happy music with the dark lyrical content.

This is supposed to be jarring. The sweet peaceful music at the beginning is designed to lull you into a false sense of security and a belief that everything is going to be fine. The abrupt shootings and lyrics are designed to wake you up. This is a metaphor for needing to be jarred awake in order to fully process these events.

With wide eyes and a level of alertness the viewer has yet to see, we now understand Donald Glover to be "awake" and running from all the atrocities he has witnessed.

Couple this with our understanding of Donald Glover as a placeholder for "America", we can also take the running scene to symbolise America attempting to outrun the blood and chaos wrought from its "original sin" of slavery.