7 Stupid Things You Should Never Do At A Gig 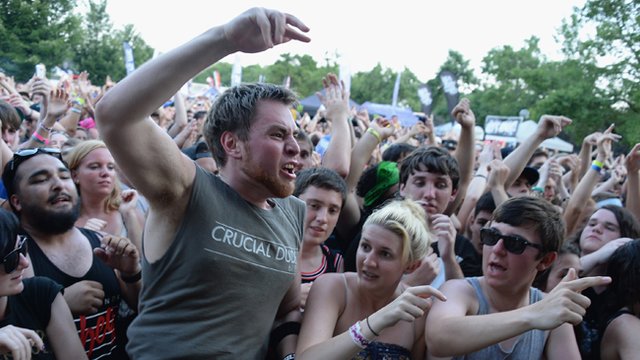 A comprehensive guide to not being an idiot at shows.

As you probably saw over the weekend, Adele caused a bit of a stir when she dragged a fan for filming her concert. Somewhat ironically, another fan filmed the whole incident go down for our viewing pleasure:

Adele raises some good points. There are literally thousands of people who would love to be sat there enjoying her show. But what about the other fans in audience?  Gig etiquette is still a big issues among music lovers. Whether it’s cameras, violence against women or disrupting an artist’s performance, people feel very strongly about how others should or shouldn’t act at a show.

We felt like an education was probably in order. As every show is different, and gigs are supposed to be fun, not prescriptive, we didn’t want to come up with a list of every little pet hate (and boy that would be a long list). Instead we’ve come up with 7 general suggestions for not being a d*ck that should apply to any show. If you think we’ve left anything off, let us know in the comments!

1) Put your fucking camera away.

Ok, let’s start with Adele’s personal beef with videoing gigs. While calling out a single fan in front of thousands of people might seem a little OTT, she is definitely right on this. Why? Firstly, no one wants to watch your video with shitty sound quality and shaky camera work. This should only be allowed if either Prince or David Bowie comes back from the dead (fingers still crossed!)

Secondly, you’re not only distracting yourself by focusing on getting a good shot but you’re probably obstructing someone’s view behind you. Just take a couple of snaps for your insta and live in the moment! You can always buy the DVD if you want. Or watch someone else’s shitty video.

2) Don’t get wasted, unless everybody else is…

You know what’s really annoying? Drunk people. And I say this as someone who will probably be on dialysis in the near future. Thing is, I don’t get drunk at gigs, primarily because I want to remember what I’ve watched. But it’s not nice for anyone having to deal with a person with stinky breathe who keeps attempting to start a conversation during songs, or treading on your toes or pushing into you. Raves or festivals are an exception (usually because there is more space more than anything else!) but what is the point in being at a show if you’re not even cognitive able to enjoy it? Go home, you’re a mess.

3) There is no more room at the front.

You and your 12 friends might have made an unbreakable chain as your slither your way between the tightly packed rows of gig goers but you’re on a mission to nowhere fam. You deserve all the tutting and stink-eyes your getting right now. How about you try finding space BEFORE the main act start or have a little party nearer the back where there is more room for you all. Just a thought.

Why would you even come to a show if you plan on talking over the music? Sure, if you wanna get a pint or your mum just died so you need to leave, you have a valid enough excuse. But the other people around have all paid money to see the artist perform, not hear you chat about why you secretly hate your BFF. Don’t make me Twitter shame you…

Why are you starting a mosh pit at a Dashboard Confessional show, bro? Seriously the number of gigs I’ve been to where guys (it’s always guys) start moshing despite everyone else standing pretty still is ridiculous. Sometimes you just have to accept that you can’t mosh to everything. Just chill out and take up taekwondo or something.

Alright, I get it. Beyoncé is slaying a totes emosh cover of “All Night” and you wanna make out with your bae but can you keep the necking to a moderate level? Not only am I single and bitter but also you’re blocking my view. Save it for when you get home and you put on your ~late night~ playlist.

It’s 2016; wear some deodorant before heading to a show. There is absolutely no excuse for smelling like a pig at a gig.

Shocking! Watch Grimes Get Electrocuted And Style It Out Mid-Gig