At the height of her influence as one of the biggest names in modern punk, Kathleen Hanna, of Bikini Kill, used to encourage one very important rule. "All girls to the front," she says in the 2013 documentary about her life entitled, The Punk Singer. "All boys, be cool for once in your lives." Hanna used to say this because she recognized that the "punk scene" was not safe for young female fans. Whether it concerned the threat of violence at shows or sexual attacks, Hanna saw that the young girls who attended punk shows weren't being protected enough.

Two decades later and, unfortunately, there is still much need for the "all girls to the front" rule.

Earlier this week, British band, Slaves, issued a Facebook statement after it came to light that female members of their Cardiff crowd had been sexually harassed by male concertgoers. Slaves were apparently alerted to reports of men groping women during their performance which inspired them to speak up. 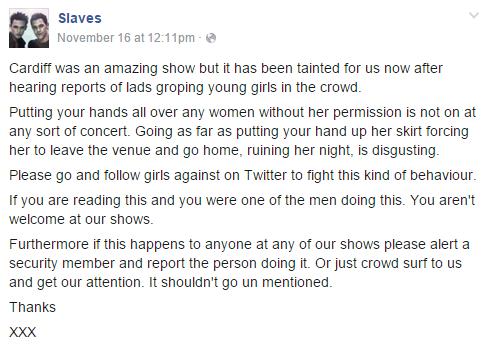 In an age where many fandoms are made up of primarily female admirers, there is no space for this type of behaviour to go unmentioned and unmanaged. Slaves did well to call out this behaviour--and they're not the only ones.

Be good to each other in the pits. No place for shady macho behaviour towards the sisters!

91% said they did not feel security took their concerns seriously enough, leaving less than 10% reporting that they were satisfied. Security training should not only cover crowd control and security procedures. It should include harassment training and harassment response training as well.

i and a friend were followed and harrassed by drunk men at a concert when I was 15 and she was 13. #yesallwomen experience this shit.

Two girls harrassed at Mawazine-concert. They went to police, officer said: ‚Well, two girls alone at a concert, and you drank… so...’

Women deserve to feel like they are in a safe space when they attend a concert. Poorly behaved concertgoers who take advantage of the conditions need to be called out as a matter of decency. Not only that, but bands like Foals and Slaves need to continue working with campaigners to make sure their gigs are a safe place for girls out to have a good time. And if that doesn't work, all girls to the front. All boys, be cool for once in your lives. 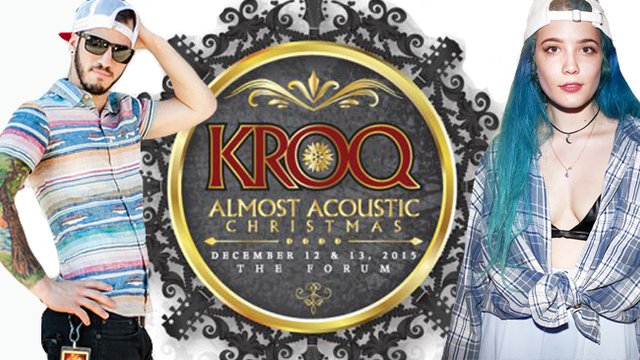 KROQ Just Announced The Gig Of The Year And We Are Freaking Out!