17 Lyrics About London Only Londoners Will Understand 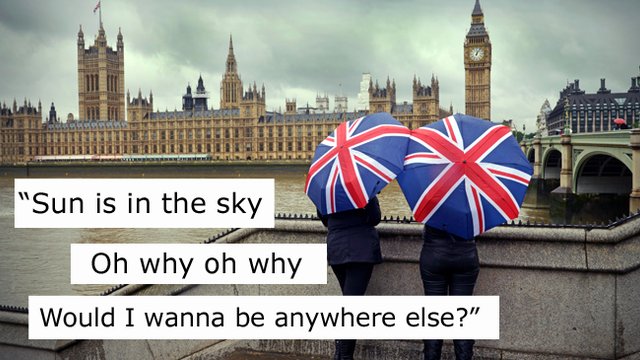 London is arguably the music capital of the world. Sure, music venues and nightclubs might be shutting down at an alarming rate, but nothing compares to the sticky floors at Brixton Academy, the views over the city from Alexandra Palace, or catching the world's biggest stars at Wembley stadium. We're really are spoilt for choice.

It got us thinking about all the amazing music and lyrics that have been written about our city and so we decided to pick out some of the best. Get out your cockney rhyming slang dictionary and dust off your copy of the A-Z, we're going on a field trip to E8 and beyond.

Key lyric: "I like it in the city when two worlds collide / You get the people and the government / Everybody taking different sides"

Adele's love letter to London is still one of her best songs, and it captures how a lot of people feel about the city. Yeah, it can be a bit shit, but you wouldn't change it for the world. That said, less tourists on Oxford Street would be nice.

Key lyric: "Right away from Holloway / I said "Mum, this isn't a holiday / Listen up, I ain't coming back / Till I can fill the shack up with all gold plaques."

Technically this song is about running away to L.A., which we're sure anyone who's been caught at Victoria on a Friday at 5pm will have fantasized about at one point or another. We bet Charli doesn't have to deal with cancelled Southern trains anymore, does she? Lucky cow.

Key lyric: "You might laugh you might frown / Walkin' round London town / Sun is in the sky oh why oh why? / Would I wanna be anywhere else"

There are so many truths about London in this song that it could be an Attenborough documentary. On a real, London in the sunshine is one of the best place in the world and we won't hear anything to the contrary.

Me: London slang is the best.

Also me: I have no idea what these people are saying.

Key lyric: "East London is a vampire / It sucks the joy right out of me"

This is pretty self-explanatory tbh.

Key lyrics: "I went to meet Sheila / She was a diva / She told me that no sister never did appeal to her / So down the banks of the river / We sit there gasping at the dreams / That we share with the crew / Reminiscing with the view"

Shelia gets around, doesn't she? Last time we saw her she was hanging out the doorway of a Brick Lane bagel shop. No one has seen her since.

Key lyric: "I go out and walk around / In the early morning rain / To the sound of prowling cars / And the sweeping of broken glass"

We've all wanted to walk away from London at one point. But then we remember that the rest of the country voted for Brexit and we come back to our senses.

Key lyrics: "I was waiting for a cross-town train in the London underground when it struck me / That I've been waiting since birth to find a love that would look and sound like a movie"

Haven't we all imagined our own sliding doors moment where we miss the train and get on the next one and meet the love of our life? We can only live in hope.

Key lyrics: "In the west end on the weekend / Got no money by the end of the weekend"

No London list would be complete without the boy from Bow. While we wouldn't be seen dead anywhere further West than Holborn, we can emphasise with the situation here. If you happen to know anywhere still selling pints under £4.50, please hook the good sis up in the comments.

Key lyric: "Ow no I should've kept my receipts / 'Cause the sandwich I bought / Yeah it's been off for a week / And Tesco's stealing my money"

It's almost become cliché to talk about gentrification in London. While the city continues it's quest to turn every corner into a branch of Tesco Metro or Pret, flame-haired poet in resident Archie Marshall wrote a song about it. Let's hope he's still got somewhere to perform it in five years time.

Key lyrics: "So you bought a trilby and a cheap guitar / You thought you'd be a star / It didn't get you that far"

Remember that time in 2005 when everyone dressed like Pete Doherty, only without the heroin? Girls Aloud, being the all-seeing oracles that they were, foresaw how embarrassing this would all be in ten years time and had the good sense to mock indie boys on 'Hoxton Hereos'. Well done, ladies. Now, hurry up with that reunion already.

A wry look at the astronomical costs of living in one of the most expensive cities in the world. Although, by our calculations, it's probably more like £28k now, given inflation. I blame Brexit.

Key lyrics: "Drunk, she stumbles down by a river / Screams calling London / None of us heard her coming / I guess the carpet weren't rolled out"

Will people ever stop screaming 'SHEEEEELIAAAAAA' at the top of their lungs when they hear this song? Probably not.

Key lyrics: "Dressed smart like a London Bloke / Before he speak his suit bespoke / And you thought he was cute before / Look at this peacoat, tell me he's broke"

Am I the only one that still bristles when Kanye drops the words 'WAGs' and 'Bloke'? It sounds so strange in an american accent.

Key lyric: "London calls me a stranger / A traveller / This is now my home"

As far as I'm concerned Ed, you'll always be welcome round my gaff. Just leave the guitar at home, yeah?

Key lyric: "How come every time you come around / My London, London bridge, wanna go down like"

Remember that time Fergie turned one of the most iconic pieces of architecture in London into an innuendo for oral sex? #NeverForget

6 years later and this is still the ultimate anti-hipster anthem. See you down London Fields later, yeah?