5 Things We Learned At Marina and The Diamonds' London Show 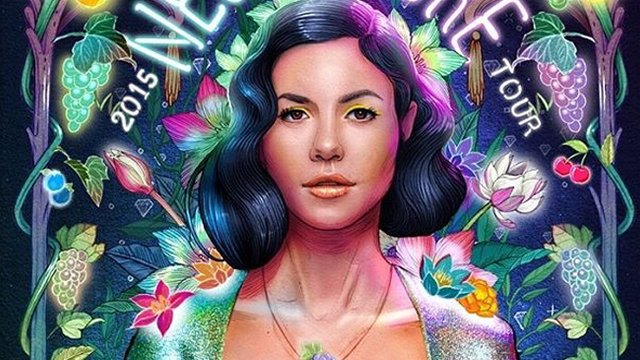 Last night (7 December) we went down to see Marina and Diamonds play some music in a live scenario and to say that we enjoyed it would be a bit of an understatement.

Following the release of her third album Froot earlier this year, Marina has been roaming the globe in support of the record finishing this year's leg of the tour in London's historic Palladium Theatre. Having never seen Marina live before, here's what we made of the whole shebang.

From the outlandish outfits to the gorgeous animated backdrops, the show was a camp-fest from start to finish, full of theatricality, operatic vocals and more oomph and stage presence than the world's largest disco ball.

"I chose this venue because I like to blend theatre with what I do," Marina said of the venue of choice, one of London's most famous theatres. And, to be fair, the air of theatricality and eccentricity was everywhere, with the show even being split into three parts, one for each respective album release.

3) The outfits were on point.

Opening the show in a purple sparkly top and matching trousers (that had the craziest legs we've seen in a while), Marina changed outfits three more times, each one outdoing the next. For the final part of the show dedicated to Froot, she emerged in a spangly blue catsuit which glistened like 1000 little LED lights, which was really something.

Ok, we knew this anyway, but seeing it live for the first time really cemented it for us. In fact, we thoroughly enjoyed the Electra Heart section of the show, which was chokablocbked with bangers galore, and really god the crowd going.

5) The Froot section was seriously the best.

Going anywhere on a Sunday night can be a struggle, but during "Froot" we actually danced like it was Friday night again. Seriously though, watching the show gave us a greater understanding of the album as whole, and we've been unable to stop listening to it since.

Closing the show with "Blue", it felt like Marina had arrived at a comfortable place in her career, one where she might not achieve total worldwide domination, but one where those that do love her adore her whole heartedly.