'Punk Goes Broadway' Is An Album So Good, It Deserves To Be A Real Thing 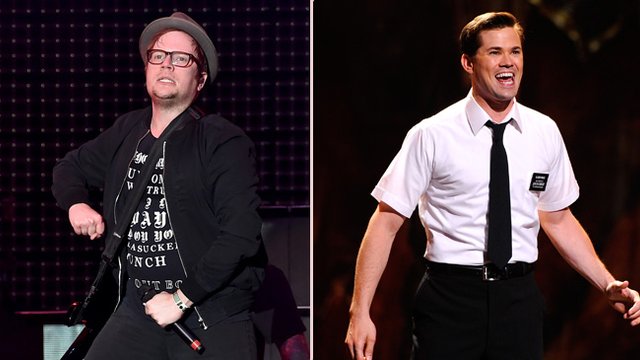 FOB doing Mormon? TØP taking on Hamilton? Time to get in the studio boys...

We've had Punk Goes Pop, Punk Goes Metal, Punk Goes Christmas and a campaign to establish Punk Goes Disney - you name the genre and fans worldwide will go nuts for a punk cover album featuring all their faves in action.

But there is one particular area of music yet to be tackled by the Punk overlords; one album that would set the fandom on fire and produce the kind of earth-shattering vocal performances we had previously only dreamed of.

We are talking, of course, about Punk Goes Broadway.

Think about it theatre nerds - the only singers in the world able to match the high pitched, insane vocal stylings of pop punk frontmen are the Broadway hoofers doing it live eight shows a week. It's a match made in musical heaven.

We've already had Green Day's American Idiot in theatres and Brendon bashes out 'Luck Be A Lady' whenever he gets a chance - surely this is the next logical step?

But who should sing what? Don't worry, we've already put together what we consider to be the perfect tracklisting for Punk Goes Broadway Volume 1. Check it out below and, if anyone knows anybody from Fueled By Ramen, feel free to pass it on.

You just know that Patrick Stump has the perfect soul voice to match Andrew Rannells at every turn. In fact, whenever they are next recasting Elder Price, let's just make sure the Soul Punk gets to at least audition.

Listen to that funky ass bassline and vocal riffing - this is basically a piano-heavy take on 'Ain't It Fun'. Hayley would crush crush crush this number and we all know it. Bonus points if they can bring Mark Hoppus in for a cameo as Ms Trunchbull.

Alex Vs Jack. Valjean Vs Javert. Sword fight optional but very much encouraged.

Track 4) Panic! At The Disco - 'Those Magic Changes' From Grease

Brendon has already demonstrated time and time again that he has the perfect smooth vocals for any swung number and this classic would be the perfect addition to any setlist, sandwiched between 'DOAB' and 'Impossible Year'.

Ok, ok, yes they are not technically a punk band, but they are in the scene and, the fact is, Tyler is the only man we'd trust to do these fast-paced rhymes the justice they fully deserve.

This is basically a punk musical already and this ode to, um, self-loving fits into the 'Longview' line of pop punk obsession with this particular subject. Plus the heavier vocal has Jeremy written all over it.

An energetic Disney number like this needs the kind of bouncy guitar only NFG can provide. Again, dance break is optional but strongly encouraged.

Track 8) Waterparks - 'Let Me Be Your Star' From Smash

You only have to listen to the final bars of 'Royal' to know that Awsten has the diva like vocal chords to carry this torch song to its big finish. And yeah, it's technically from a TV show not a musical but, hey, it's our idea and we say it counts ok?

Any self-respecting drama nerd has this little number stashed in the back of their rep book and Jenna's Limitless vocals would give an extra big boost to that famous ending. Whaiko can play Glinda if he's up for it too.

Let's finish up with the punk musical that has already smashed Broadway, with Billie's son Joey handling the epic medley and bringing it into 2017.

Got your own track ideas? Let us know.