Riverdale Soundtrack: 6 Of The Best Songs From ‘Riverdale' 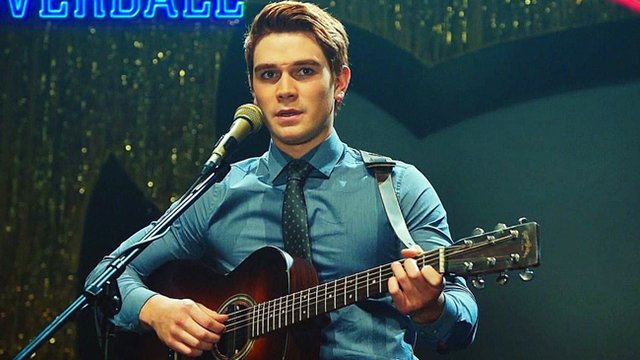 Don't @ me but Pop's Chock'lit Shoppe has the hottest jukebox in town.

It feels like the whole internet has now become obsessed with who killed Jason Blossom on Riverdale. In fact, it's the only thing we talk about at PopBuzz HQ. We've even got a Jughead-style suspects brainstorm on the wall, except all the pictures are of Archie's abs (even if Archie didn't kill Jason, his abs are certainly guilty of inciting indecent levels of thirst).

Other than the murder mystery and KJ's abs, you might have noticed how insanely good the soundtrack is. The music supervisors on the show have decided to overlook pop superstars in favour of up-and-coming talent and artists on indie labels, continuing the tradition of teen-based dramas, like The OC and One Tree Hill, giving vital exposure to artists who actually need it.

In that spirit, we picked out 6 of our favourites from the soundtrack that we think are worth you getting to know a little better.

In episode 3 Veronica makes the frankly terrible decision to go on a date with Chuck Clayton and they end up making out in his car to 'Natalie' by Milk & Bone. Laurence Lafond-Beaulne and Camille Poliquin, aka Milk & Bone, are from Montreal and they sound very similar to the synthy, melancholic goodness found on the Drive soundtrack. So 10/10 to Veronica for choosing this as her make-out song but maybe pick a guy who isn't an absolute idiot next time, yeah?

The real turning point in Jughead's journey on Riverdale comes at the end of episode 4 where we learn that Jughead is homeless and has been living in the projection room at the Twilight Drive-In cinema. And for that sad scene the music supervisors, of course, needed a sad song so they went with relatively unknown singer-songwriter Dean Lewis and his emotionally-wrought number 'Waves' and it's been a massive hit with fans. Almost all the 450,000 views have been since the episode ran and Dean has doubled his subscribers. It's bringing a tear to my eye all over again!

Remember the scene where Veronica drags Josie, Kevin and Reggie to the club only to have a bit of a meltdown about her mum forging her signature to secure Fred the building contract? Well the song playing in that scene is the breath-taking 'Like It's Over' by Jai Wolf (featuring MNDR). We've written about the song before and we're adamant that it's one of the most criminally-underrated songs of 2016. If you, like Veronica, enjoy being an emotional mess in public places, check out Jai's rather excellent Kindred Spirits ep.

Everybody knows Pop's has got the hottest jukebox in town. Well, it's probably a Spotify account but we like to imagine they're still kicking it old school down in Riverdale's neon-lit cafe/paradise. In episode 5 when Fred asks Hermione out on a date, you can hear the bouncy pop-rock of Night Moves playing in the background. Their second album Pennied Days is definitely worth your time (and we reckon Jughead would *definitely* be a fan).

If you're old enough to remember Dawson's Creek then you may have picked up on the reference to the show when Jughead sneaks into Betty's room by climbing up to her window, much like Dawson did to Joey back in the day. What happened next in Riverdale is now canon; Jughead makes his move on Betty and then she suddenly remembers what Polly said about Jason's car being hidden. It's all soundtracked by this beaut from Emily Afton. As it happens I've lost my phone again. If Jughead would like to climb into my window for a make out session to help me remember that would be great.

It seems like a million years ago now that Archie and Veronica, in episode 1, play '7 Minutes In Heaven' with Cheryl who forces them into her closet for reasons we're still not entirely sure of (literally this game makes absolutely no sense what the hell?!) Anyway, by the time they come out, Betty has done a runner and they go chasing after her. Zella Day is responsible for the music in this scene and we're a little bit in love with her. In fact, we even played song on PopBuzz Radio when it came out last year. It's not the only song by Zella the shows uses. Make sure you check out 'High' too which is a total bop.

To listen to whole Riverdale season 1 soundtrack head over here.