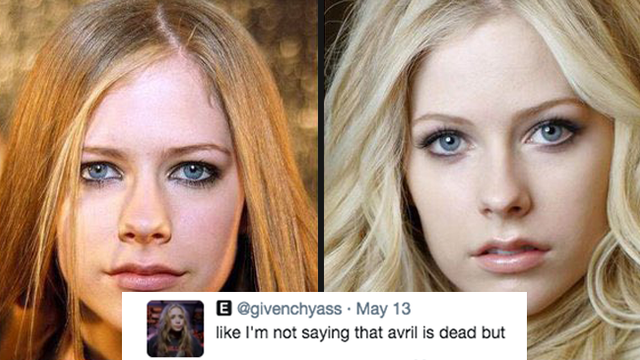 The "Avril Lavigne Is Dead" conspiracy theory is back and it's bigger, better and has more receipts than ever.

The original conspiracy theory started on a Brazilian fan page (because of course it did) a few years ago and suggests that the real Avril Lavigne died due to the pressure that came with her fame after the release of her 2002 album, Let Go. She began using a body double called Melissa. Avril is said to have "passed away" in 2003 and Melissa has been in the limelight ever since.

After Avril addressed the rumours, the Brazilian fan page have backtracked on their "evidence" but the conspiracy theory just won't let up. In fact, Twitter user givenchyass just posted an entire thread with evidence and new findings and everyone is losing their shit over it.

avril lavigne is dead & was replaced by a look alike: a conspiracy theory thread pic.twitter.com/9eearQ2rte

While continually reminding everyone that this is in fact a conspiracy theory and 100% facts, they present the following evidence: The stark change in genre of "Avril's" music over a 12 year span because as we all know, it is illegal to reinvent yourself and your sound.

They then point out the differences between an 18-year old Avril and her much blonder, much older professional look-a-like, Melissa. In a plot device that was ripped straight outta The Lizzie McGuire Movie, the conspiracy states that Avril allegedly taught Melissa to sing, sound and behave just like her so she could step away from the limelight.

so she decided to hire a look alike to walk around LA for her and pose for the paparazzi (avril on the left, look alike on the right) pic.twitter.com/wNSrDVh09i

Here's where it gets dark. It was then conspira-cised (is that even a word? It is now...) that Avril hanged herself after the tragic passing of her grandfather.

she basically lost it. she was so distraught, crying on stage and in interviews. she would lock herself in her apartment and write for weeks

From then on, instead of informing the media with what really happened, the studio send Melissa out in her place.

she was at the peak of her career, so it is said that instead of letting the news of her dying go into the media, they used her look alike

"Avril" had already recorded her second album but when the next album came around in 2007, her image had completely changed.

The conspiracy even goes into detail on Avril/Melissa's distinctive marks on their bodies.

and a lot of avril's birthmarks she had before are gone. and she also has a same tattoo that melissa has ..

And the shape of their faces.

okay but look at the difference of the jawline!! avril in 2002 (left) vs melissa in 2014 (right) @givenchyass CONSPIRACY CONFIRMED pic.twitter.com/FFBnji9emw

People are now sending new evidence to the original thread; apparently there are clues in her lyrics.

And even in her handwriting.

The thread, which has gone viral with over 100RTs, is sending people into absolute meltdown. Of course it's NOT TRUE, but let us have this for one moment, if only for the sweet sweet memes.

me: conspiracy theories are dumb & i don't believe in any of them.

twitter: Avril Lavigne died years ago and was replaced by a clone

Trying to figure out the Avril Lavigne conspiracy theory like pic.twitter.com/FJvQiZB4LE

Me: I don't believe in conspiracy theories

Random thread on Twitter: Avril Lavigne died and was replaced with a clone

me: "Conspiracy theories are silly. People are gullible."
Twitter: "Avril Lavigne is dead & was replaced by a clone."
me: pic.twitter.com/BZyCXRETBz

me: conspiracy theories are so fake lmao
me 20 seconds after reading the avril lavigne thread: pic.twitter.com/LprNMv34E2