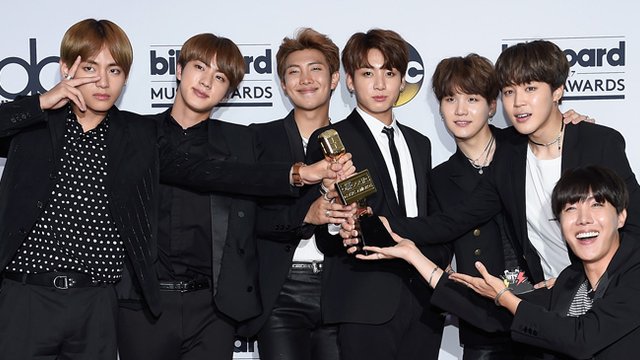 Now BTS are best friends with every major pop star in America and winning awards left, right and centre, it would seem like their takeover of Western music charts across the globe is all but inevitable... except for one small detail: they're yet to have a major hit in a English-speaking country.

That is not to underestimate the incredible achievements of the band so far, especially in the last 12 months. But the fact remains that they still haven't had a hit single that has dominated radio and streaming. But perhaps that will change now it's been announced the Korean boy band will be working with EDM monster-hit makers The Chainsmokers.

As reported by Billboard, The Chainsmokers’ Andrew Taggart worked with BTS’ rappers -- Rap Monster, Suga, and J-Hope -- to create a track titled "Best of Me" which will feature of the band's forthcoming mini album Love Yourself: Her album.

Now, this isn't necessarily the collaboration we dreamed off (that would be with Charli XCX) but we think a BTS x Chainsmokers track makes perfect sense. Their sounds aren't a million miles away from each other and they both love making big, anthemic pop songs. We're definitely intrigued! Fans, however, were a little more mixed in their reactions.

@BTS_twt this better be the best song i've ever heard in my life if i'm gonna unwillingly listen to the chainsmokers for y'all pic.twitter.com/m1ysNQ4eIN

me: i hate the chainsmokers they're trash

me: sO BABY PULL ME CLOS-

If we didn't even know the chainsmokers participated in a BTS song y'all would love it and talk no shit. But nope. Y'all gotta complain.

me trying to convince myself that bts collabing with the chainsmokers isnt That bad https://t.co/nm3NPwoBIq

anyways it was nice of bts to share some of their talent with the chainsmokers pic.twitter.com/HG1m2G2NYl

halsey trying to come into the studio when she saw the chainsmokers and bts recording pic.twitter.com/uptqXPIucg

So how did the collab come about? Well, it looks like their first meeting was at the Billboard Music Awards in May and the two groups have been in contact ever since. It is also the first time BTS have worked with an American artist.

Expectations for Her are very high among BTS fans and industry insiders alike. According to Billboard, Her has already received over 1.05 million preorders despite very little information about the record being confirmed. Only one song so far, "Serendipity”, featuring member Jimin last week, has been released. You can watch that here.