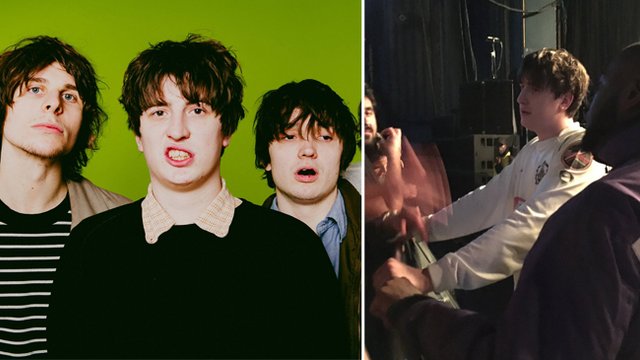 The band Cabbage have been denied allegations raised on social media of inappropriate behaviour towards a female fan in the middle of a show earlier this week.

Cabbage are supporting Kasabian on their current tour and, at the April 19th show at London's Kentish Town Forum, lead singer Lee Broadbent was accused of having 'sexually assaulted' a young female fan stood in the front row, putting his hand down his trousers and rubbing it on the girl, grabbing her hair and "basically forcing her face first into his crotch".

The incident was first raised in an extended message on Twitter from user Nicole S. Rushworth who was also at the show:

A few words on the behaviour of @ahcabbage last night at @KasabianHQ, please suppprt @safegigs4women to encourage a safer gig environment pic.twitter.com/xXujlsS8EC

As detailed in the tweet, the girl's father complained to production staff who brought Lee out to apologise. But, instead, an argument ensued with Lee refusing to say sorry and claiming his actions were just part of his "act".

However, Cabbage have since released a statement on Twitter denying the incident, claiming that Lee never put his hands down his trousers and that the story is full of "fabrications":

They also claim that Lee was more than willing to apologise to any audience members who were offended by his performance and that he shook hands with the father and girl in question with no argument.

The story has split opinion among Twitter users, many showing support for the girl involved, encouraging increased safety for women at gigs:

@m0th_man @NicoleSR1 @ahcabbage @KasabianHQ @safegigs4women Too fucking right as well. Not to mention the fact he broke public indecency law by showing his bare arse to me at the end of the set

@NicoleSR1 @KasabianHQ @safegigs4women I was at this gig, its disgraceful that this happens. Was shocked how few women were there.

@NicoleSR1 @ahcabbage @KasabianHQ @safegigs4women He always rubs himself in front of 14/15 year old girls, happened at blossoms in Lincoln a few months back :/

But other attendees at the show have come out in support of Lee, claiming that he did apologise and that the whole story is not being told, much like the band's statement suggests:

@NicoleSR1 @ahcabbage @KasabianHQ @safegigs4women This is pure slander. I was at the gig and i was there when Lee apologised aswell! THEY BOTH SHOOK HIS HAND!

@NicoleSR1 @ahcabbage @KasabianHQ @safegigs4women If he did dis it's disgusting but HOW CAN YOU BE SO SURE? Please don't persecute dis poor guy til u see da evidence #innocenttilprovenguilty

Cabbage will play with Kasabian in London again this evening (April 20th). You can find more information about the Safe Gigs For Women campaign on their webpage here.