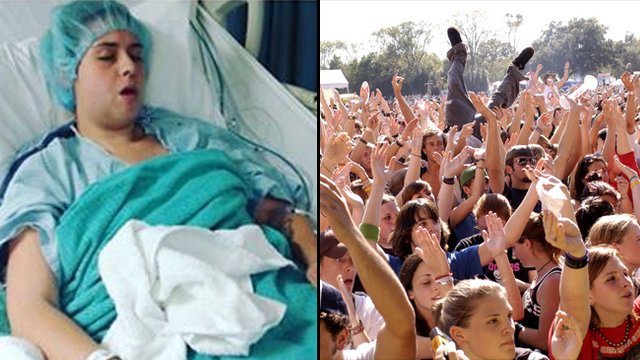 Emily Jane Hoffman has called out her attacker in an emotional post on social media following her extensive surgery.

A pop punk fan in the US has been hospitalised after an attack in the mosh pit that left her with a shattered jaw and bleeding of the brain.

Emily Jane Hoffman was attending a Code Orange show in Salt Lake City on January 21st when she was kicked in the face by a fellow concertgoer, thought to have been wearing steel-toed boots, sending her into the trauma ICU for a week of treatment. She faces a three-month recovery period after 6 hour reconstructive surgery implanting 4 metal plates to reconnect her jaw to her face.

Emily posted a public message on Facebook following the incident, including photos of her injuries, as she called out her attacker, stating that "When you go to a show where there will be moshing and you wear steel toe boots, your intentions are to hurt someone."

Unable to work as she recovers, Alt Press reports that a Go Fund Me page has been set up to help Emily. At the time of writing, it has raised over $11,000 of the $30,000 total they are aiming for.

Around the middle of the show, Emily was standing on the out side of a mosh pit when a man wearing steel toe boots went to 'crowd kill' and round house kicked her in the jaw. Emily went to a show to have fun and to support a band she loves. No one should ever leave a show in this condition, no matter what kind of music you are going to support. Have fun out there but please, not in such an inconsiderate and violent way.

Code Orange addressed the story from the stage at a recent concert, reminding fans to look out for each other in the mosh pit.

The band have also released a statement of support online, having contacted Emily directly about the attack.

Please help support our friend Emily. We have all kinds of different people at these shows, and we have to all take care of each other-always. We've played hardcore shows all around the world and this is the first and only time an injury of this nature has taken place, and hopefully the last. We've been in contact with her and those around her since the beginning and she knows she's got our support through this healing process. Our fans are very important to us, and as we continue to grow we all need to protect, support and help each other up.

No word yet on whether the attacker has been identified or if charges will be brought against them. If you would like to help with Emily's Go Fund Me campaign, you can donate here.