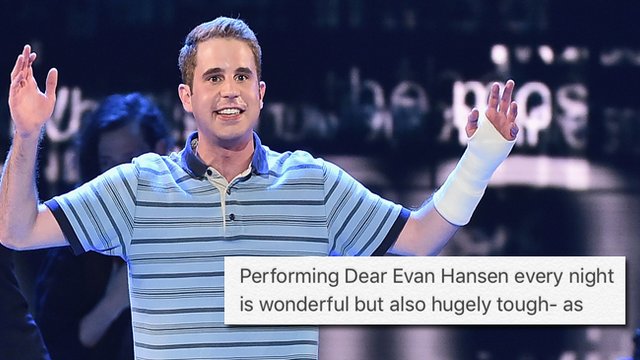 The Tony award winner sent a message to his online critics, garnering huge support from fans and fellow actors.

Ben Platt, the Tony award winning star of Broadway musical hit Dear Evan Hansen, has been receiving a great deal of support online after he posted a message to Twitter last night (July 3rd) regarding his recent absence from the stage door after shows.

As has become something of a Broadway tradition, many audience members will run outside at the end of a performance in order to meet the stars at the stage door and get their autographs. For bigger shows, this can attract huge crowds that effectively stop traffic and can often put a great deal of pressure on the actors.

People in the Dear Evan Hansen fandom had spotted some angry audience members sending Ben some negative messages on Twitter, clearly not realising that meeting the stars ain't included in the price of the ticket.

If it happens, it's a bonus guys. Don't expect so much.

Ben Platt, however, explained to any upset or angry fans exactly why he has been unable to meet fans at the door in recent days, due largely to the demands of the role and the effect on his wellbeing:

Ben was quickly backed up by legions of fans as well as many other actors from the Broadway community at large:

If ppl are tweeting nasty things,they obviously didn't take one of the show's lessons home w them. And that's sad. Take care of yourself

You give ur heart & soul on that stage, u don't owe an apology or explanation to anyone. As a fan & critic, thank u for giving life to Evan.

So sorry about the negative things people have to say, we know how important your self care is, we appreciate and love you

Meet & greets are not a right/included in your ticket price. If an actor comes out of the door, it's a privilege. People pay to see a show.

Stage door meet and greets have been a hot topic on Broadway recently after Panic! At The Disco star Brendon Urie posted a message instructing fans to remain in the theatre during the bows section of the show Kinky Boots, in which he is currently starring, rather than running out to line up at the door.

Please don't run out of the theatre before the play is over. Let the cast take their bows. We aren't rushing out so neither should you.

Basically, if you're seeing a show, just stick around and enjoy the whole thing, including bows, and if the stars don't come out to say hi afterwards, maybe realise that it's because they have 8 shows to perform each week and they need to keep themselves in a decent enough state to deliver that. Just a thought...