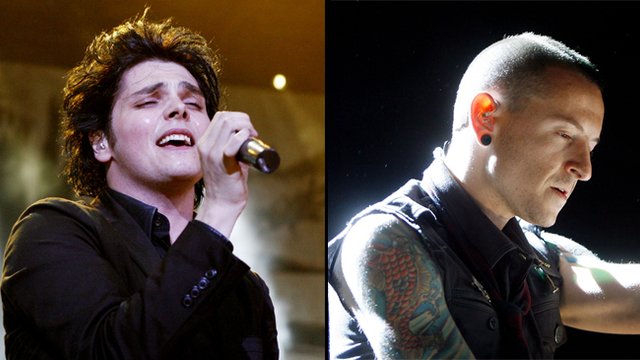 Way and the late musician became close after My Chemical Romance and Linkin Park toured together in 2007.

Gerard Way has paid tribute to the late Linkin Park frontman Chester Bennington, sharing his memories of the singer in a new interview.

Chester passed away by suicide last week (July 21st) after a long struggle with addiction and depression, shocking the music world with messages pouring in from some of the biggest names in the alternative and rock scene.

Gerard was speaking to Nerdist about his latest comic book release Doom Patrol when the subject of Chester came up, the singer having been an old friend of Way, the pair hitting the road together during the My Chemical Romance days as part of the Projekt Revolution tour in 2007:

"I was devastated to hear about Chester. He was actually at my wedding. Not a lot of people were there because we got married super quickly at the end of the tour when half the people had gone home. So there were literally only 30 or 40 people there, and he was one of them. His band and bringing us on tour, that changed my life. I met my wife. We have an amazing life now and a daughter. My memories of that period and meeting Linds (Way, Gerard's wife) again are tied into Chester and his band. It’s so sad. I think a lot about mental health and it’s something I’ve always wanted to address in Doom Patrol, so I definitely think we’ll see a lot more of that now. I’ve been through depression, dark times, and therapy. I can really apply that stuff to these characters."

Meanwhile, a DJ at KROQ uncovered an old interview clip recorded ahead of the Projekt Revolution tour where Chester sang the praises of MCR, a band he was always very supportive of:

Other figures such as Pete Wentz and Alex Gaskarth have also urged any fans struggling with depression to seek help and talk more openly about the topic, in an attempt to remove the stigma from the subject.