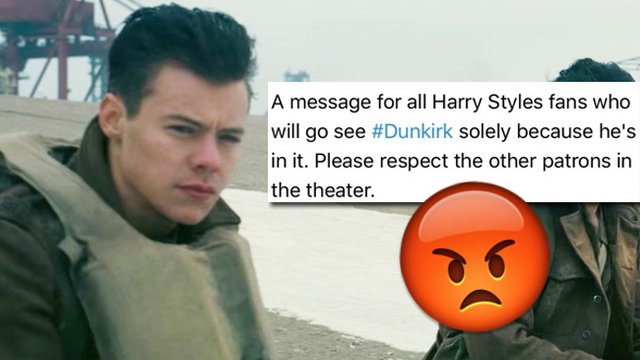 After a lengthy 'warning' message was posted on Twitter, people immediately came to the defence of Harry's fandom.

Harry Styles fans have clapped back at an online critic as their hero makes his acting debut in Dunkirk.

Some Twitter users have sent out some shady messages aimed at fans, ordering them to keep quiet and remain calm in the cinema, much to the irritation of the fandom themselves who, obviously, understand how a f*cking cinema works.

One such message was posted by @PabloBeal, the since-deleted tweet provoking massive debate and garnering criticism from fans and supporters.

Safe to say, nobody was impressed.

My my. This requires a healthy dose of get-over-yourself

they can watch this movie however they want and I hope they do! this is condescending as hell

this is condescending af

Ouch, someone get Pablo some ice packs 'cos he just got burned!

But, to his credit, Pablo has now posted a follow-up message, realising the error of his ways and apologising to the fans he upset.

This is one of those times where you just gotta look at yourself in the mirror and say: "I done fucked up now" #Dunkirk #HarryStyles #MyBad pic.twitter.com/Yb6fXvBNCP

Basically, if you plan on going to see Dunkirk at the weekend (which you really should - we hear it's awesome), don't give Harry Styles fans any patronising speeches because you are 1) wrong and 2) will get destroyed.

And if you are a Harry fan, have fun. Your boy looks set for a big acting future!