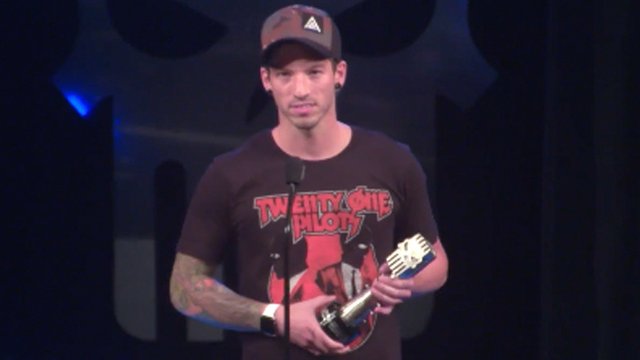 TØP, Panic! and Pierce The Veil were among the big winners at the awards ceremony which also saw performances from All Time Low and host Andy Biersack.

The Alt Press Music Awards took place in Cleveland, Ohio last night (July 17th) with a star-studded cermony hosted by Andy Biersack and featuring all of your fave bands.

Panic! At The Disco took home the award for Artist Of The Year, beating out the likes of Blink-182, Fall Out Boy, Good Charlotte and Green Day in the fan vote.

Meanwhile, Twenty One Pilots were given the gong for Most Dedicated Fanbase, the clique winning over fellow nominees Melanie Martinez, Paramore and PVRIS. Josh Dun turned up to pick up the microphone-shaped trophy.

The TØP drummer also took part in an epic drum off performance alongside Adrian Young of No Doubt and Frank Zummo of Sum 41, Josh strutting through the crowd with a snare drum much to the delight of fans in the audience.

Other winners included Pierce The Veil who took home Best Album for Misadventures and Waterparks who were named Best Breakthrough Band.

Other performances on the night came from the likes of All Time Low who performed 'Good Times' from their recent (very good) album Last Young Renegade. Check it out below:

Read about all the winners and performances over at AltPress here.