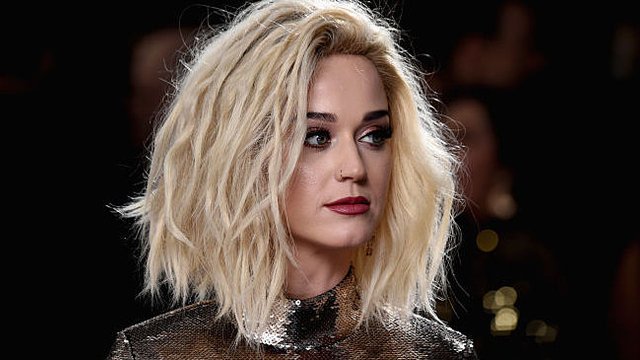 We may have celebrated Katy Perry's new "political" era a bit prematurely.

The internet was questioning Katy Perry's woke credentials during last night's Grammy Awards as the singer, who recently rebranded herself as a "conscious" purveyor of "purposeful pop", seemingly took a jab at Britney Spear's previous struggles with mental health.

Speaking about her new bleach blonde hairstyle on the red carpet, the 'Chained To The Rhythm' singer joked, "It's the last colour in the spectrum that I can do, I've done all of them and the only thing left to do is shave my head which I'm really saving for a public breakdown. I'm down for that."

Her joke seemed to reference Britney Spears' breakdown in 2007, which resulted in her shaving her head and eventually led to her admitting herself for treatment, as well as losing custody of her kids.

Later on, Perry, who just three days ago tweeted about her political "evolution", made a similar joke in an interview with Ryan Seacrest.

The presenter asked Katy about her brief break from music, to which she replied, "yeah, that's called taking care of your mental health." When asked how her mental health is, she joked, "Fantastic, and I haven't shaved my head yet," in what appeared to be another swipe at Britney Spears' previous personal issues.

Katy Perry "that's called taking care of your mental health" "& I haven't shaved my head yet". I know ppl are gonna go in on this #GRAMMYs pic.twitter.com/dGlmyJwdfc

Some who took issue with Katy Perry's tweets pointed out that it was slightly hypocritical for the self-proclaimed woke pop star to be making fun of mental illness.

Particularly as her performance at the Grammy's ended with the star shouting "No Hate" to wild applause from the audience.

Katy Perry wants to make "purposeful pop" but takes not one but two jabs at Britney's mental health? If it ain't woke, don't fix it, gurl.

Others pointed out that it was hypocritical of Katy to joke about somebody else's mental health struggles after speaking about her own.

In fact, "hypocrite" seemed to sum up how a lot of people felt about Katy's wisecracks.

It's so ironic how @katyperry teaches messages of feminism, love and acceptance and then trolls Britney at the #grammys what a hypocrite

@katyperry tells fans not to spread hate but just hated on and bashed @britneyspears at the #GRAMMYs! HYPOCRITE! #KatyPerryIsOver

@TouchOfMyHand @katyperry you're a hypocrite and will NEVER have as big as a career Britney had. Britney has only had nice things to say

"No hate?" @katyperry Then quit bashing others! Hypocrite! #Britney #KatyPerryIsOver

This isn't the first time Katy Perry has been criticised for her problematic behaviour. From making suicide and gay jokes in her early work to appropriating Japanese and black cultures in her music videos, the singer has been called out time and time again for being insensitive. Even if her latest political awakening is more genuine than her comments about Britney would suggest, the star will have some work to do to make up for turning mental illness into a weak punchline.

Do you think Katy Perry's comments were out of order, or was she just making a harmless joke? Does this affect your views on Katy Perry? Let us know in the comments below.