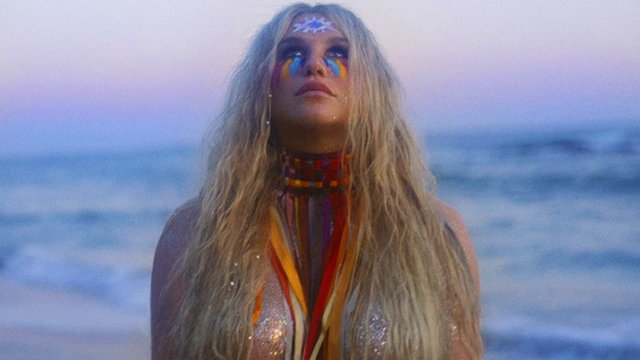 Kesha explains the meaning behind her big comeback track.

Last week Kesha finally made her big comeback with 'Praying', her first solo single since 2013 after years of legal problems following her battles with former collaborator Dr Luke.

The video for the song opens with a monologue in which Kesha that references her struggles with her own mental health and suicidal thoughts.

"Am I dead? Or is this one of those dreams? Those horrible dreams that seem like they last forever? If I am alive, why? If there is a God or whatever, something, somewhere, why have I been abandoned by everyone and everything I've ever known? I've ever loved? Stranded. What is the lesson? What is the point? God, give me a sign, or I have to give up. I can't do this anymore. Please just let me die. Being alive hurts too much."

Given everything that's happened, it was perhaps understandable that this new era in Kesha's career kicked off on a darker note in comparison to her previous party-hardy persona. However, the rest of the song takes a more optimistic tone and now Kesha has opened up about the song's meaning and its context in her new album, Rainbow, which is dropping 11 August.  In an essay penned on Lenny Letter, she explains how the song is primarily about overcoming adversity:

"I have channeled my feelings of severe hopelessness and depression, I've overcome obstacles, and I have found strength in myself even when it felt out of reach. I've found what I had thought was an unobtainable place of peace. This song is about coming to feel empathy for someone else even if they hurt you or scare you. It's a song about learning to be proud of the person you are even during low moments when you feel alone. It's also about hoping everyone, even someone who hurt you, can heal.

'Praying' was written about that moment when the sun starts peeking through the darkest storm clouds, creating the most beautiful rainbow. Once you realize that you will in fact be OK, you want to spread love and healing. If you feel like someone has wronged you, get rid of that hate, because it will just create more negativity. One thing that has brought me great relief is praying for those people. Being angry and resentful will do nothing but increase your own stress and anxiety — and hate is the fuel that grows the viruses. Don't let anyone steal your happiness!"

In a separate interview with Sirius XM, Kesha said that the rest of the album won't be as heavy as 'Praying', as joked, "I’m not just miserable...I hope people like it, I really do, but it’s really different than the music I used to make. So some people will like it and I’m sure some people won’t- but like what do you do?"

Are you excited for Kesha's new album?