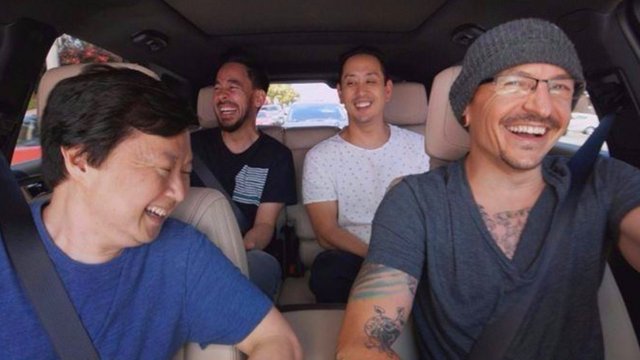 Chester Bennington family have approved the footage to be used.

A week before Chester Bennington's death, the Linkin Park frontman recorded an episode of Carpool Karaoke with the rest of the band and comedian Ken Jeong, to be aired on Apple TV. Following his suicide, it was uncertain if the footage would ever be used. The makers of the show, including James Corden, said that the family should decide if and when the episode will ever be aired.

Yesterday, the remaining members of Linkin Park confirmed that the episode will be streamed for free on their Facebook with the blessing of Chester's family.

Chester's wife, Talinda Bennington, posted this message on her Twitter to confirm the news.

James Corden confirmed back in August that he would let the family decide. “We will approach it in whichever manner his family or the people that were involved in that episode, however they would like it to be handled,” he told the Associated Press.

“We will navigate it as delicately as possible and just adhere to whatever wishes they would want because I don’t think there’s any other way we could deal with it. It’s a tragedy.”

In addition to this episode, at the end of the month (27 Oct) there will be a special tribute concert at the Hollywood Bowl in LA to commemorate the life of Chester Bennington featuring the remaining members of Linkin Park as well as members of Blink 182, Korn, System Of A Down, Bring Me The Horizon and Avenged Sevenfold. [H/T Alt Press]