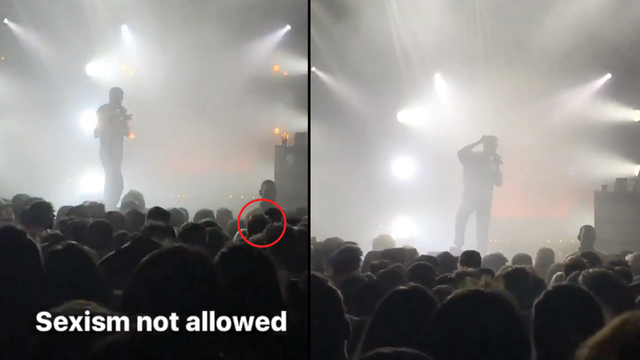 It's not uncommon for girls to experience unsafe or unwanted attention during live shows. In fact, some musicians have made it a point to call out aggressive or sexist behaviour if they see it on stage.

Rapper Loyle Carner has become the internet's new fave, after kicking out a member of the crowd who made lewd comments about an opening act's breasts.

"I'm sorry but you've got to learn a lesson, my young man," said Carner, directing security to remove a concertgoer in a black cap. "You've got to go."

The incident occurred during a show at the University of East Anglia. Fellow attendees caught the moment on video.

Performers, male or female, have the right to go to their place of work without being harassed. Carner standing up for women is something that all men in entertainment should be doing when they see this bad behaviour.

People on the internet praised Carner for speaking up.

Carner confirmed that the man in question has been banned from that venue for life.

That shit will not be tolerated at any show. He's been banned from that venue, for life. https://t.co/TK4ouHQgv0

It is 2017 but people are still harassing women who are just trying to do their jobs. Thankfully, more men are speaking up and making sure this behaviour is socially unacceptable.