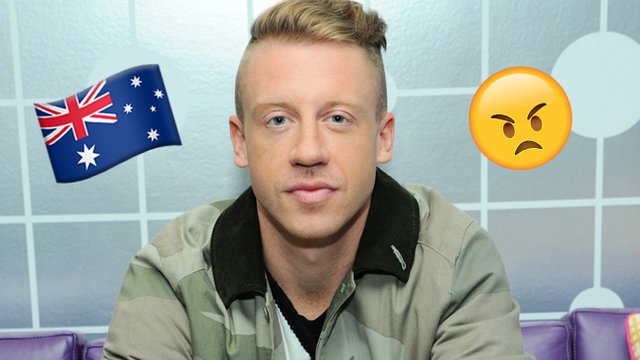 As you might know, Australia is currently in the middle of a vote on whether same sex couples should be allowed to legally marry and it's getting real messy.

Sadly (and predictably), the LGBTQ community has been forced to face a tidal wave of hate, misinformation and lies against them from those campaigning for marriage to remain between a man and a woman. Now, a bizarre twist in the story has occurred involving rapper American rapper Macklemore and his song 'Same Love'.

Macklemore has been invited to perform at Australia's National Rugby League Grand Final event, which is like a smaller version of the Super Bowl Half Time performance. Given the ongoing vote, Macklemore decided he would perform "Same Love" at the game in support of the LGBTQ community. That has pissed off many people, including Australia's former Prime Minister Tony Abbot.

The former PM, who is opposed to marriage equality, posted on his Twitter: "Footy fans shouldn't be subjected to a politicised grand final. Sport is sport!" He was quote tweeting another tweet which included a link to a petition calling for Macklemore to be banned from performing the song.

In response, Macklemore has said he's not backing down and commented on the upcoming performance to American radio show The Cruz Show.

Many people have expressed support for Macklemore, including Tony Abbott's daughter, Francis Abbott. Unlike her father, she supports marriage equality and urged Macklemore to double down on his pledge to perform the song. "I can't think of a better song for all the hundreds of thousands of people to listen to on Saturday ... This is what we need right now. Go harder @macklemore" she wrote on Instagram.

The irony of all of this is that "Same Love" was criticised by many in the gay community at the time of the song's release in 2012. As noted on the HuffPost, some critics argued that Macklemore was attempting to portray homosexuality as something “normative and good”, especially in the music video, while ignoring the larger social and historical context of the LGBTQ movement. Then there was also some criticism about how fair or right it was that Macklemore, a straight, cis-gendered male, was making millions of dollars off the back of the LGBTQ struggle - one which he has not had to endure.

Those are legitimate criticisms. That said, it's important that all artists, whether straight or not, show their support for the LGBTQ community in Australia. Macklemore performing "Same Love" will undoubtedly send a huge message of support and so we really hope Macklemore relents and still performs the song.

To learn more about the vote in Australia, why not read our explainer over here.

What is the Wear It Big Challenge? The viral TikTok trend explained