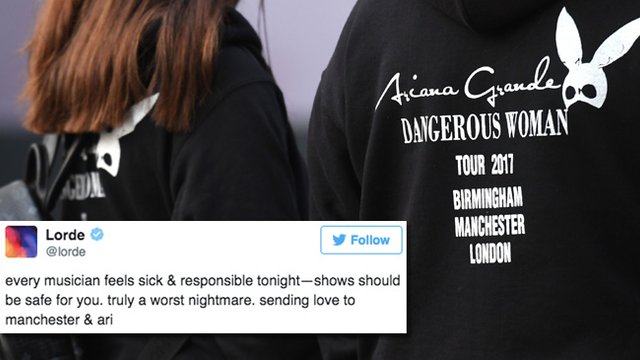 5SOS, Lorde, Paramore, Harry Styles and more have all paid their respects to those lost in the attack last night (May 22nd).

As news broke of the horrifying attacks in Manchester yesterday evening (May 22nd) following an Ariana Grande concert at the city's MEN Arena, tributes poured in on social media from musicians around the world.

Greater Manchester Police have confirmed multiple fatalities and injuries, including young children, after a bomb exploded in the concert venue foyer at around 10.30pm.

Here are some of the messages sent out from fellow musicians in support of those affected by this tragedy:

To see what has happened in Manchester makes me really sad. My thoughts are with those that are experiencing such tragedy at this time x

very sad and shocked to hear what's happened in manchester. our thoughts and love go out to everybody affected x

Sending all my love to every single family at the Manchester show last night. So upsetting

Devastated, heartbroken and horrified. Such sad news to wake up to. Please stay safe and look after each other during times like this! pic.twitter.com/YmE2r6ydJB

manchester :( prayers going out to those affected by it.

We played this arena 2 weeks ago! What is this world coming to! My thoughts go out to the family and friends who were involved! https://t.co/otQCE4S7Nz

Devastated by news out of Manchester tonight,
Sending love

My heart goes out to the people affected by what happened in Manchester, deeply saddening, sending all my love.

Music is a device of love, appreciation, and unity. Harrowing scenes in a setting I know all too well. We will not be broken. #Manchester

My whole is with Manchester

the community we all create together thru music should be completely devoid of fear. our hearts go out to Ariana Grande & crew & the fans.

This is such a senseless tragedy. My heart breaks for those affected... Respond with love, kindness, warmth. Help others in need. Be safe.

prayers to everyone in Manchester tonight.

So heartbroken hearing about Manchester. Such a senseless and ruthless act in a place supposed to be filled with such joy and love.

My heart is in Manchester tonight. I'm so sorry.

My thoughts, prayers and tears for all those affected by the Manchester tragedy tonight. I'm sending all my love.

every musician feels sick & responsible tonight—shows should be safe for you. truly a worst nightmare. sending love to manchester & ari

I'm heartbroken over what happened in Manchester tonight.
Sending love to everyone involved. H

My thoughts and prayers are with you Manchester, everyone try to stay safe at this scary time x

Sending thoughts and prayers to everyone in Manchester.

Absolutely Horrendous what happened in Manchester tonight. My thoughts are with the great people of Manchester and also Ari and her team xx

What is happening in Manchester is absolutely terrifying. Praying everyone effected has found safety and hope Ariana is okay :( Jesus

My prayers are with you Manchester