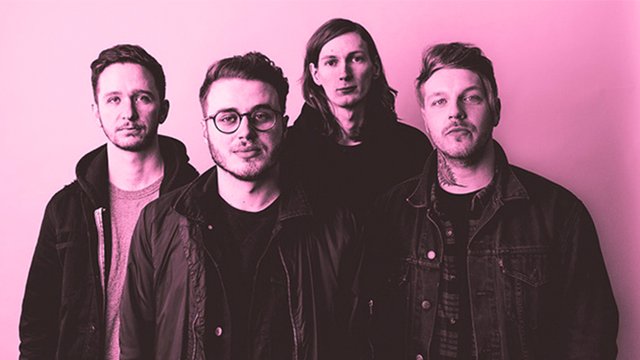 Many are criticising the band's response to the incident.

Moose Blood have released a statement announcing that they have fired their drummer, Glenn Harvey, after it was discovered that he had been sexually harassing a female fan over the course of months.

Initially, rumours suggested that the girl in question was a minor. It has now been confirmed by the girl herself that she was 18-years-old at the time.

The original incident in question relates back to 2015. In a series of tweets shared on social media this week, the woman making the accusations outlines how Harvey repeatedly sent dick pictures and a video. It was only after her boyfriend intervened via Facebook messenger that Harvey admits to sending the images and apologises.

Here are the Facebook messages between her boyfriend and Harvey.

For the people saying we created a fake account to pretend Glenn apologised please see the original screenshots pic.twitter.com/7IFXfmsF5M

And here are the tweets further explaining the context around those messages.

What's also troubling is how she tried to bring attention to Harvey's behaviour at the time but was shut down by administrators on pop punk message boards. She alleges that one admin even contacted her boyfriend, instead of her, to verify the claims. More girls have come forward since the incident to say that Harvey also sent them unsolicited messages.

It seems Glenn was also in charge of the band's social media, hence why some believe the band wasn't aware of the allegations earlier (which we find a little hard to believe, if we're honest).

It’s taken a few days to respond to everything that’s circulating online at the moment regarding our band but Glenn Harvey is not currently a member of Moose Blood.

In no way do we support any disrespectful or inappropriate behaviour towards anyone, male or female.

This is not a decision we’ve taken lightly.

We will continue with our North American tour, with the exception of St. Louis tonight, with our good friend on drums.

Moose Blood and our label Hopeless Records will be making a charitable donation to RAINN to show our support and awareness.

We appreciate your patience and your loyalty. MB

There has been a mixed reaction on social media. Some are praising the band for confronting the issue while others believe the band are only acting now they've been forced to because of the public outcry. There are also other suggestions that other members of the band might have also engaged in similar behaviour (which we have not been able to verify at the time of writing).

im proud of moose blood for owning up and apologizing. lots of respect for those boys

yall don't need to boycott moose blood as a whole or anything like damn pls stop. glenn already got kicked out like what else do u want smh

So unbelievably disappointed by the Moose Blood situation, another band I will never listen to/see live again

That moose blood apology was awful, donating money to a charity doesn't help the women who's lives have already been affected

multiple ppl in Bad Band are exposed, a conversation:
"shit. uh, what if we kick out the guy who doesn't write the songs"
"nice"
*applause*

We think it's fair to say this situation is far from over.