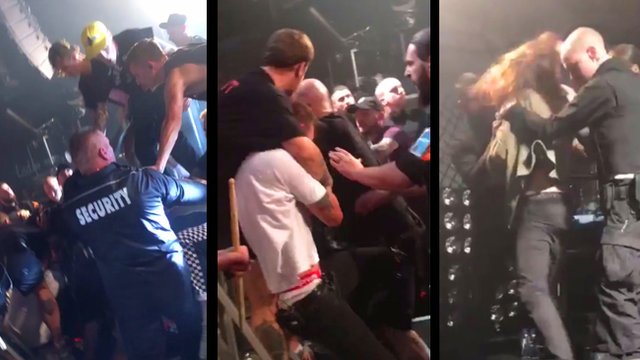 Watch the shocking footage that emerged from the pop-punk band's show in Nottingham.

Shocking video footage has emerged from Neck Deep's show in Nottingham last night (09/10) which was shut down after a fight broke out between security and Neck Deep fans and then the band themselves.

The band were only two shows into their set at Nottingham Rock City when security started getting rough with crowdsurfers. As reported by Alt Press, security became very heavy-handed with crowdsurfers and that's when the band tried to intervene which seems to have escalated the situation further. Pretty soon an open brawl was happening between the security and the band and their crew.

SECURITY ARE PIECES OF SHIT AND NECK DEEP FUCKING DID SOMETHING THIS IS WHAT HAPPENED pic.twitter.com/Mbrb5UxpYt

@Rock_City_Notts staff abusing fans so @NeckDeepUK step in & cancel the show, gutted but big up to neck deep for sticking up for their fans pic.twitter.com/voIlP1fZSh

@NeckDeepUK THANKYOU for defending your fans. As to @Rock_City_Notts sort your staff out. The people that are supposed to keep us safe huh? pic.twitter.com/V2FCqLIJf4

A little while after the incident, frontman Ben Barlow came back to the stage to tell their fans the show was over. "Security fucked it. There was a fight. Show's over". He then dropped the mic and walked off stage to grasps and moans from the crowd.

Later on, Ben apologised to fans outside the venue, saying he's never had to cancel a show for a reason like this before.

Neck Deep have just issued this statement about what happened, stating "things escalated to a point that they should never have gotten to" and that "everything that went down could and should have been handled better by all parties".

We hope everyone who went to the show is safe and well.