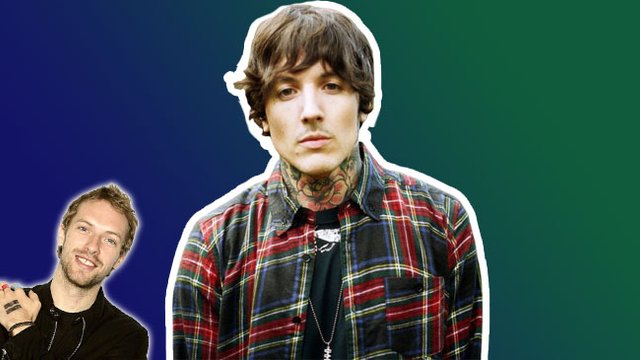 The UK music industry's annual debauched office party, otherwise known as the NME awards, took place in London last night. Among the award recipients were Yorkshire-based noise makers Bring Me The Horizon who took home the "Innovation Award" presumably for their boundary-pushing work in the field of dog-based Instagramming.

The boys also performed "Happy Song" during the show, at which point the evening kicked up a gear as Oli roamed into the audience mid-track.

There goes the room deposit...

The table in question was actually occupied by recent Super Bowl performers Coldplay, who took home the "Godlike Genius" award, presumably for their boundary-pushing work in the field of diva-centric sporting half-time shows.

Here's an image from down the front:

Although, to be fair, Chris seems to be having a grand old time.

Or is he just putting on a brave face?

Either way they gave the group a standing ovation.

@coldplay Yea that was the band who you stole there artwork off! #BMTH #NMEAwards2016 pic.twitter.com/WrCVW4m8Ce

Oli explained himself to the NME in the cold light of morning:

I had no sound in my ears so I thought 'Well, there might be sound out there.' There weren't sound out there so when I came back there was a table, which I got on. There wasn't any sound on there, but it was a bit more energetic up there. It was in no way a protest against Coldplay

So it wasn't any direct beef with Coldplay but still, was it necessary? It's an odd but memorable award show moment, surprising everyone in the room but what happened to Chris Martin's dinner order after this? Did he have to eat out of his lap? And what a waste of good booze! It was certainly exciting, but a tad inconsiderate perhaps.

Have your say now!