Would You Start A Band With Your Family? This Famous Singer Did... 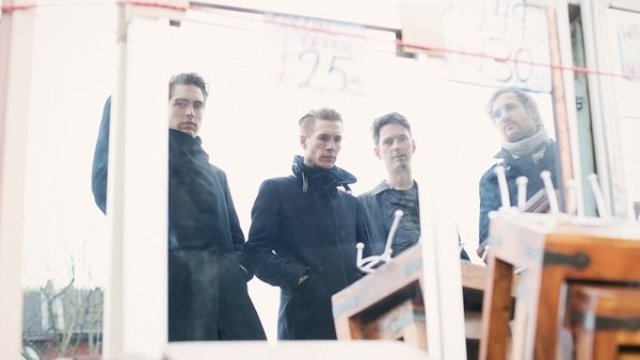 What was Charlie Simpson's incredibly embarrassing old band name? What is the best way to enjoy a bowl of porridge? And which Take That tune makes for the best karaoke performance?

We chatted to Once Upon A Dead Man, the new synth-pop heavy outfit featuring Charlie Simpson of Busted and Fightstar fame, his brothers Edd and Will and their longtime friend Simon Britcliffe, as they prepare for the release of their debut EP.

PopBuzz: The EP is called Concepts And Phenomena - what's the concept?

Edd: It's really about questioning reality. I teach philosophy, I like Plato and people like that so it was a bit of a conceptual record in that sense. I think it's very much about asking questions about what you believe truth and reality to be and that's potentially what the idea behind the title Concepts and Phenomena is. It's a phrase coined by Plato, not to sound too pretentious about the whole thing but that's where the inspiration came from.

PB: So you're a philosophy teacher - how much does that play into your music?

E: In terms of lyrically it certainly does because I find it absolutely fascinating so lyrically it definitely plays a part.

PB: It's a different direction for all of you guys, have you always been secret synth pop fans?

E: We've always liked it, we haven't explored it really before and that was one of the things we focused on with this record. We wanted to go into territory that none of us had gone into before. We all loved records like the Postal Service Give Up - we all loved that record. We stumbled upon it really, we were trying things out and then we wrote a song called "Rush" and I think that was the point where we thought, yeah this is where we want to sit with this. It was a happy accident really but from there the focus on the synth stuff came in really.

Simon: I think also there was the idea of trying to blend all the vocals because a lot of the time there are four part harmonies on the record and trying to really make that a feature but not over-egg it. The juxtaposition of that against the synth pop worked quite nicely.

PB: Do you think fans of your other acts like Union Sound Set or Fightstar will get on board with the new material or is it a separate project entirely?

E: I hope it's a mixture of both really. Just to reference Charlie, if you look at his musical crossover from his solo stuff to Fightstar to the Busted stuff, I think he's definitely taken fans. I think for the most part good music is good music and I know if you look at our record collections there's significant diversity in types of music.

S: I think also everybody's tastes change as they grow older and they like to try out new things so from the point of making music, you wanna try something new and not make the same record over and over again and work with different people. I'd worked with Will and Edd before but I hadn't worked with Charlie so that was really great. I think just trying to grow and explore as musicians is something that the people who listen to the music also feel like they're doing.

PB: Simon, what was it like being the only outsider in the Simpson family band?

S: It was fun, it didn't feel like making a record with a family, it's really hard to describe it. It just felt like making a record with a load of friends really, that's all it felt like. There's obviously a few creative differences and that's no different from working in a band who aren't your brothers. I really enjoyed it. Also we had Jesse Quin who produced it and the five of us have known each other for...how long Edd?

S: Yeah so it felt like we were making a record in a really cool place, an abandoned airfield in Suffolk, and it was just a really nice experience.

S: "Turning Japanese" by The Vapors.

E: Just for my wife's sake, something by Take That probably, "Greatest Day" or something.

S: What do you think Charlie would do?

E: God knows, one of his own songs probably...

PB: What is the worst band name you ever had?

PB: How old was he when he had that?

E: Oh god, probably about 11 or something like that. Then Will had "Fridge".

S: I was in a band called "5 Monkey 12" when I was about 17 which I don't know if it's an awful name but it's an interesting name. I don't even know where that came from.

E: Ooh yeah this is important. I think I'd go with Alpen. That's my regular go-to. Just Swiss original. It's a staple.

S: I'd probably go for something simple like porridge but I'd flash it up a bit with some blueberries and maybe some banana or chocolate drops or something.

E: That's how crazy it gets with Once Upon A Dead Man.

PB: Finally, can you sum up the new EP in 3 emojis?

S: That's the next cover!

Concepts And Phenomena is out April 1st.