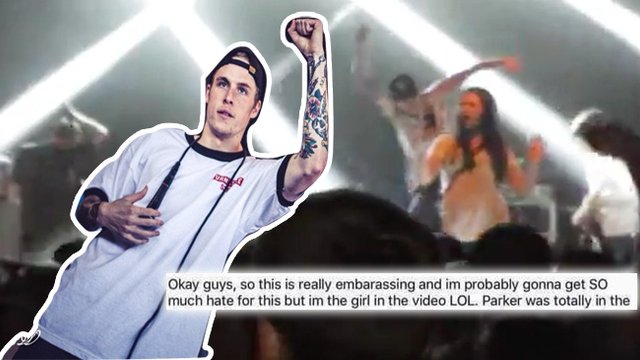 Plus The Story So Far are banned from the Toronto venue involved.

The video of The Story So Far singer Parker Cannon kicking a fan offstage for taking a selfie has caused huge amount of debate online and now, as the clip goes viral, responses from those involved have started to emerge.

UPDATE: A fan was knocked unconscious as the girl kicked offstage collided into the crowd.

Here's what we know so far.

1) The girl involved appears to have responded via Facebook. 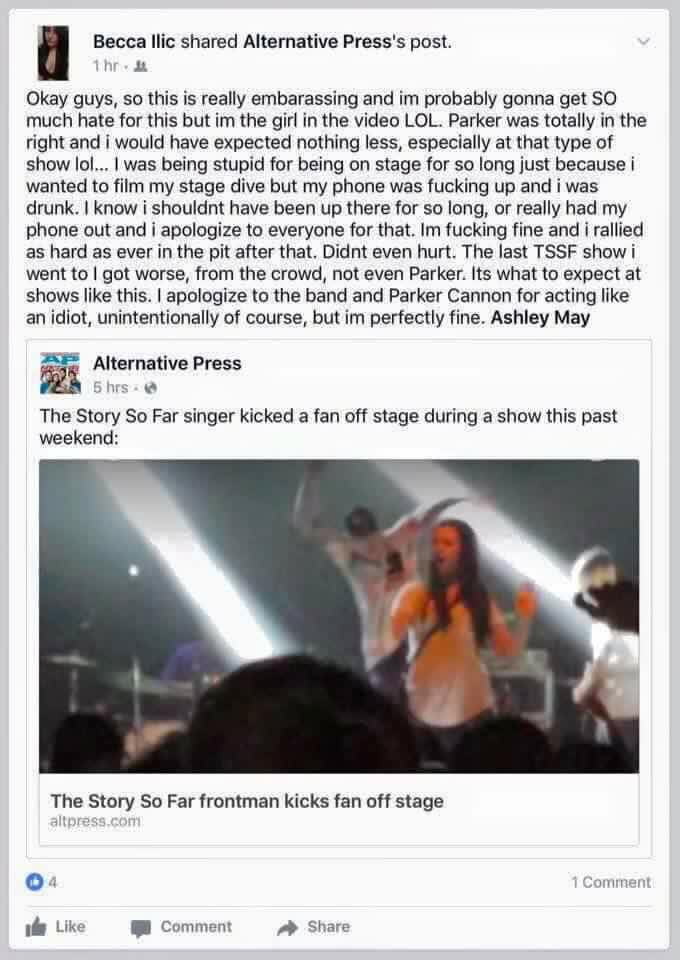 Although we are still awaiting official confirmation on its authenticity, it would appear that this is a response from the girl kicked in the video. She has apologised to all involved and appears to take the bulk of the blame for the incident herself. Given the huge amount of public attention, we can't say we blame her for attempting to smooth things over. However, this in NO WAY excuses Parker's actions - assault on a fan is still unacceptable and should not be encouraged or dismissed for fear of similar situations in the future.

Plus, if you don't think situations like this can lead to serious consequences, just ask Randy Blythe about his trial for manslaughter after someone he pushed off stage at a Lamb Of God concert died of head injuries.

2) The Story So Far have been banned from the concert venue.

The Mod Club in Toronto where the incident took place have told CBC that The Story So Far have been officially banned from the venue, the manager Jorge Dias quoted as saying that he has never seen anything like it in 14 years of working there.

We are appalled by the actions of the singer. That was a very cowardly act.

3) A lot of fans are still making excuses for Parker.

The comments section on our Facebook post was flooded with defenders of Parker overnight, all with similar themes and arguments. It's disappointing that we have to do this but, quickly, let's just debunk a few of those excuses shall we?

"She shouldn't have been taking a selfie on stage".

No, she shouldn't have, but that does not justify assault. Nothing does.

She wasn't in the moshpit. She was jump kicked, from behind, by surprise, into a crowd of people at full force.

She's entitled to her own opinion but, by saying Parker was in the right, she is encouraging further actions like this. She may have, luckily, not been injured this time but Parker might have an even more serious issue to address next time.

"But Parker always tells fans not to take selfies on stage".

So he should have got security to deal with the situation appropriately.

"You are only get angry because she's a girl, he's kicked guys before and it wasn't a big deal".

Violence towards women is NEVER ACCEPTABLE and the normality with which it is being readily accepted here is sad to watch. And yes, obviously, we also condone Parker's previous actions against male fans.

Parker Cannon is yet to comment. We'll keep you posted.