PSY Just Released The Most Terrifying Video Of The Year 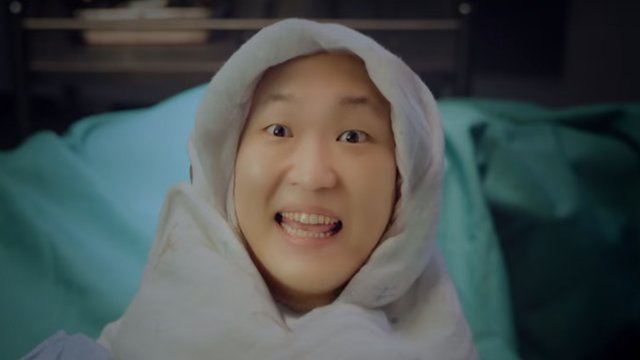 It is with great regret that I have to inform you of a terrifying music video that was released on to the internet last night.

PSY, the invisible-pony riding South Korean rapper, released his eagerly-awaited follow up to "Gangnam Style" in the early hours of the morning. The song is called "Daddy" and the video is as creepy as the song title suggests.

We're going to break down the most horrifying moments in GIFs to assess whether a crime has been committed. Some readers may find the following images disturbing. If you have a sensitive stomach or an allergy to trash, we recommend that you look away now.

In the opening scene, a baby has been born with PSY's face. Little did we know, the worst was yet to come.

We hit an early nadir after this incident in a nursery. God help those children.

Many viewers have questioned the decision of parents to allow their children to perform in such extreme, subversive pop music videos.

There is a brief respite from the carnage as PSY woos his audience with some fabulous salsa dancing. The chest hair is also magnificent.

Which is then replaced by this. No one is quite sure what it is or what it's meant to represent. It is, however, presumed to be very dangerous. Approaching with caution is advised.

At one point, PSY morphs into an old man with a harem of admirers. The whereabouts of these women right now remains unknown.

On the left, we can see a woman in a pink dress. It is believed she is experiencing a "Psy-attack". Victims can usually make a full recovery after a course of therapy which involves listening to copious amounts of Enya.

PSY tries to escape the crime scene by flying, to no avail.

It's truly terrifying stuff. Unfortunately, it unlikely that any charges against PSY as most people will be copying the video for months to come. And, if we're honest, we probably will, too.

If you'd like to watch the video in full, you can do so below. Please note that this is done at your own risk.