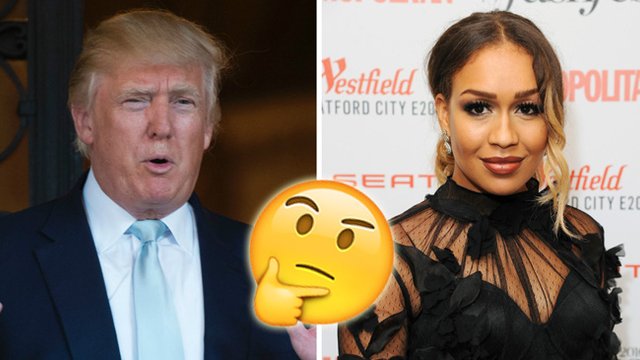 And we don't think Trump is going to like it.

As most people are aware by now, Trump is having a little trouble booking performers for his inauguration ceremony on the 20th January in Washington DC.

Trump's campaign was so toxic and divisive, no musician or artist dare associate themselves with him. The Donald has literally been asking anyone and everyone to perform. So far the line up looks more like something you'd find at a community centre fundraising gig than the inauguration of the powerful person on the planet.

The only acts confirmed so far are America's Got Talent contestant Jackie Evancho, who will sing the National Anthem, and then it's believed there will also be performances by members of the Mormon Tabernacle Choir and the Radio City Rockettes. We're sure looking forward to that one!

The latest artist to be invited to perform is former UK X Factor contestant Rebecca Ferguson, who has gone on to achieve a respectable degree of success after leaving the show in 2010.

But instead of denying the request altogether, Rebecca has said she will perform at the event but has one condition: that she can perform 'Strange Fruit'. Originally written in 1937, the song was made famous by Billie Holiday and then later by Nina Simone (Trump's "friend" Kanye West also sampled Nina's version on 'Blood On The Leaves'). It is widely regarded as one of the most important protest songs from the civil rights movement in America.

In a message sent via Twitter, Rebecca explains the historical significance of the song and why she would be willing to perform it at the inauguration ceremony.

"I've been asked and this is my answer. If you allow me to sing "strange fruit" a song that has huge historical importance, a song that was blacklisted in the United States for being too controversial. A song that speaks to all the disregarded and down trodden black people in the United States. A song that is a reminder of how love is the only thing that will conquer all the hatred in this world, then I will graciously accept your invitation and see you in Washington. Best Rebecca X"

Do you think Trump would accept the offer? Do you think Rebecca would go through with it? We'll have to wait for Trump's response...although we think it will probably be a no. Shame.