This Guy Got A Selfie With A Rockstar He Didn't Know - Do You Recognise Him? 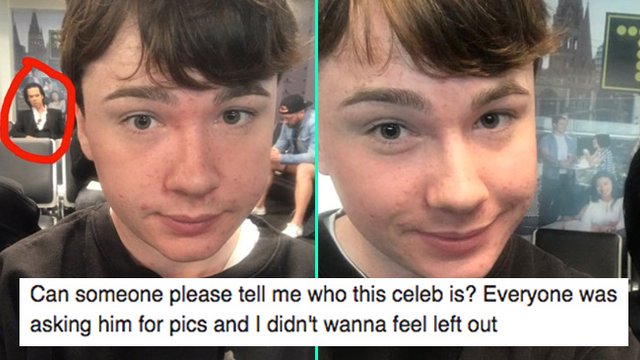 James Malcolm posed with the star but was not ready for the internet's amazing response...

A young comedian from New Zealand had his selfie go viral after he posed with a rockstar despite having no idea who he was.

James Malcolm, the self-proclaimed "wannabe gay icon" and "Taylor Swift of New Zealand Comedy" according to his Twitter bio, was waiting to board a flight when he noticed one of his fellow passengers getting a lot of attention around him.

Does anyone know who this is? People keep asking him to sign their t shirt pic.twitter.com/Md4fU1uKZD

He even had a duet with Kylie once. It was a very big deal at the time.

But, unable to find an immediate answer on social media, James just decided to hedge his bets and get a photo in case he regretted it later.

Can someone please tell me who this celeb is? Everyone was asking him for pics and I didn't wanna feel left out pic.twitter.com/s67vF5rZKZ

And that's when the fun started...

Because while James was up in the air, his photo spread around the internet with increasingly hilarious responses to his question.

Here's just a few of our faves:

@DieJamesMalcolm idk who he is, but he's from slytherin.

Fantastic work all around.

James was obviously a bit shocked when he got off the flight but he seems to be taking it well.