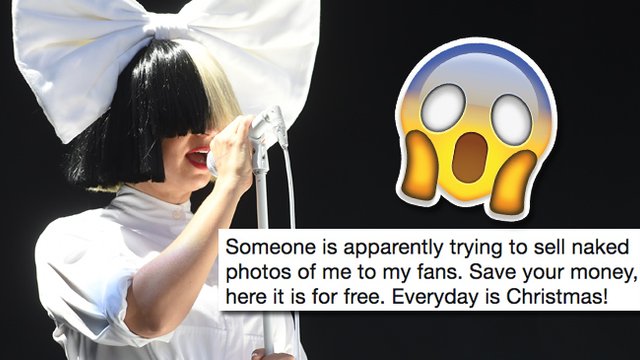 The Aussie singer had the perfect response to a photographer attempting to sell nude images of her online.

Sia has clapped back at a paparazzi photographer who was attempting to sell nude photos of her online by posting them to her own Twitter account.

The Australian singer, currently preparing for the relase of her upcoming Christmas album, discovered that shots of her, taken with a long-range lens against her consent, were being shopped around online by the photographer who appears to be affiliated with the agency FameFlyNet. At least 15 images are said to have been taken.

So, Sia decided to take the matter into her own hands and confront the photgrapher head on, reposting the picture online to her more than 3 million Twitter followers in the perfect clapback:

Someone is apparently trying to sell naked photos of me to my fans. Save your money, here it is for free. Everyday is Christmas! pic.twitter.com/aeQlnTwLuy

Safe to say, her devoted fans were similarly impressed by the move:

You better prove to the media it’s your body and you get final say and control over your body ! pic.twitter.com/jWt2rFzfTs

Great work everybody. Possibly the greatest clapback of 2017 so far.

Sia's new album, Everyday Is Christmas, is due for release on November 17th.