This South Korean Band Are Being Roasted Online After Spending $90,000 On Plastic Surgery 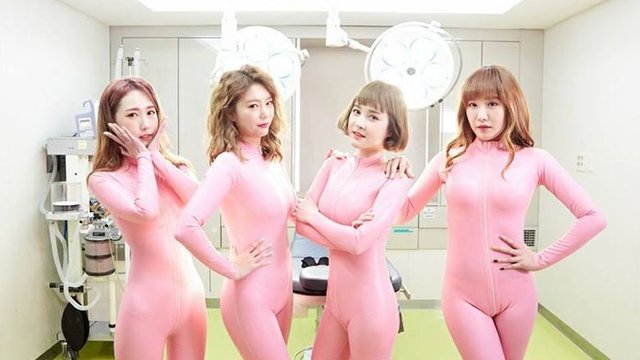 It was all for a music video and people think it's a bit extreme.

For many South Korean performers and young people, elaborate beauty treatments and cosmetic enhancements have become massively entrenched in the culture. It is estimated that South Korean women spent twice as much money on beauty and makeup than their American counterparts. South Korea also has the third largest plastic surgery market in the world.

One K-Pop group is taking this to extreme heights as they debut $90,000 worth of cosmetic treatments to fans and spectators. You've likely never heard of them, but Six Bomb are making quite the splash with this truly eye watering amount spent on enhancements.

To understand Six Bomb's staggering decision to alter their outwardly appearance, you must take into account the norms of pop performers in South Korea. These musicians tend to have carefully crafted images and will often promote a release through elaborate "concepts". A concept could include themes as innocuous as school uniforms, as risque as all leather, and as shocking as cosmetic surgery.

Six Bomb, as far as I'm aware, are the first to really exploit this extreme beauty concept and the whole thing can only be describes as surreal.

The group came under fire first when they debuted the "Becoming Pretty (before)" video.

In the song the girls talk about "becoming pretty" and can be seen going to consultations for their various upcoming procedures.

Following the video, the girls underwent nose jobs, breast implants, cheekbone shaving, and eyelid reshaping surgeries. Six bomb say they were not forced into anything and that they wanted to have these surgeries either way.

The "after" is the finished product, and features what is supposed to be their "glamorous" transformation.

Unfortunately, the band have yet to reach notable levels of fame despite having five albums out. And, this latest stunt does not seem to address their biggest issue.

K-Pop is one of the most competitive music markets in the world. For a lot of fans, this is nothing more than a weak concept executed badly.

i feel bad for six bomb after all those money they invest for ps that they can use for better music and mv they're still....a..flop....

South Korea may be gaining a reputation for cosmetic enhancement, but it's clear that a concept centered solely around surgery is not winning Six Bomb any points with K-Pop fans.