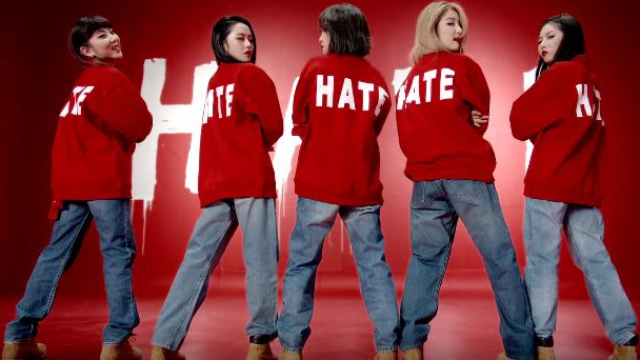 Are you ready to hate everything?

If you weren't totally convinced that Kpop was having a bit of a love affair with Skrillex, South Korean five piece, 4Minute will confirm all your sneaking suspicions. The girl group are getting ready to release their seventh mini album and they've chosen the Skrillex produced, "Hate", as their lead single.

"Hate" is one hell of a track. It starts as a piano led ballad before transitioning into more mid tempo, trap infused dance vibes for the kids. "Hate" finally descends into a Skrillex patented breakdown in the chorus and, by then, you're feeling just a tad bit frazzled from all the quick changes.

4Minutes sing mainly in their native Korean but drop a few English bombs on us and they definitely have us feeling some type of way. "I hate you" and "I don't need you" are the chorus takeaways and, as far as pre-Valentine's Day sentiments go, they've practically summed it all up.

me: hating is toxic i love loving
4minute:
me: i love hating its my favorite hobby ive never loved before pic.twitter.com/N1KUI39gQC

Me when talking about 4Minute pic.twitter.com/6Ws5HFs7hD

Visually, 4Minute are selling some serious looks on "Hate". They haven't totally abandoned the glossy, traditional Kpop aesthetis but their red oversized jumpers and Timbaland boots certainly count for something.

If you hate your ex as much as they do, let's all just scream every lyric of "Hate" outside their window until someone calls the cops.

Check out the video for "Hate" below.