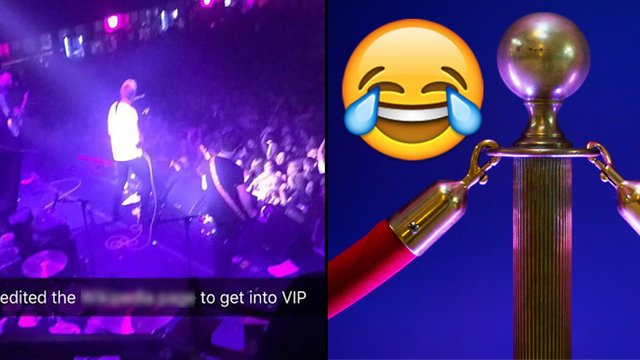 All he needed was his phone and some serious confidence...

Ever gone to a gig and longed to be able to slide on past the bouncer, limbo under that velvet rope and watch your fave band from the comfort of the VIP section? Well, one smart fan in the UK did exactly that using one very special trick - he altered the band's Wikipedia page.

Adam Boyd, a teenager from Crewe, UK, went to a show by up and coming UK band The Sherlocks but, when he drunkenly attempted to reach the VIP room, he was tragically rejected by the bouncer. Turns out the area was reserved solely for friends and family.

So, after a quick Wikipedia edit, Adam was able to prove that he was in fact a member of the band's family all along.

In fact, he's so tight with them, he even "influenced" their first single.

You have to admire the balls on this kid for not only putting himself on the page, but creating a whole fake history too. Poor effort from the bouncer though - since when is Wikipedia an acceptable form of ID?

Bravo Adam, it takes a brave man not to crack under that kind of pressure. And I should know - I'm Tyler Joseph's cousin and I inspired the hit single 'Stressed Out'. Can I hang out at the bar now?