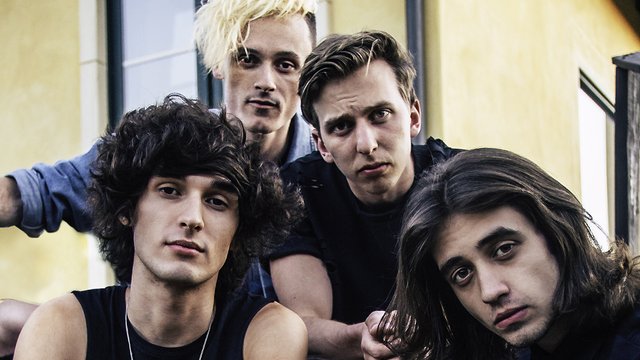 Australia's latest musical export have just dropped their debut single 'Saints Of The Sinners' with an album on the way very soon.

Meet The Faim, Australia's latest emo sensation who are heading for the big time.

The four-piece from Perth recently signed to BMG, dropping their debut single 'Saints Of The Sinners' co-written with Fall Out Boy's Pete Wentz:

And Pete isn't the only scene star these boys have been spotted with lately!

The band, made up of John Raven, Michael Bono, Stephen Beerkens and Sean Tighe, have been working on their forthcoming debut album in LA with legendary producer John 'Feldy' Feldmann who has previously worked with everyone from Panic! At The Disco to Andy Black. Plus, Blink-182's Mark Hoppus and Twenty One Pilots' Josh Dun have also been seen hanging out in the studio for writing sessions.

Busted's James Bourne and noted pop songwriter Fiona Bevan have also been working with the band, who until recently were known as Small Town Heroes (how very pop punk!).

Plus, as you can see from the video below, 5 Seconds Of Summer's Ashton Irwin has also stopped by the studio for a jam session or two:

With this much approval and involvement from our fave bands, we are already expecting big things from this lot.

The band will next be seen in the UK supporting Lower Than Atlantis on tour this April before heading to Australia to hit the road with Sleeping With Sirens. Keep your eyes peeled for more details on the most anticipated debut album of 2018 so far.