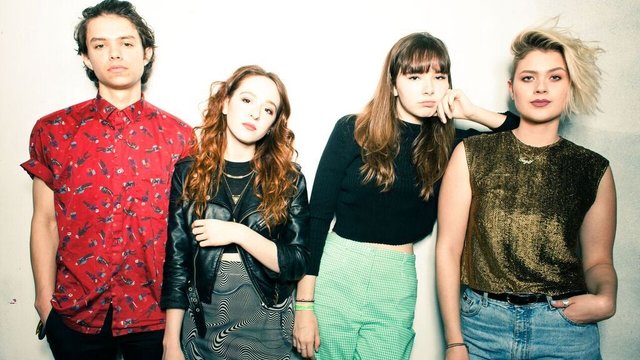 The dramatic incident was captured by fans of The Regrettes on social media who called out the "asshole" attacker.

Lydia Night, the 16 year old singer of LA based punk band The Regrettes, was attacked by a costume woman while performing onstage at The Growlers' Six Festival this past weekend (October 29th).

A fan captured video footage of the incident, posting the clip to Instagram:

"Was watching The Regrettes who are awesome and was about to take a video of how great their singer is when this crazy person came running through the crowd hitting people, fought security, and jumped on stage to continue to be an asshole."

was watching The Regrettes who are awesome and was about to take a video of how great their singer is when this crazy person came running through the crowd hitting people, fought security, and jumped on stage to continue to be an asshole. #whatanasshole #theregrettes #thegrowlerssix #notpunkrock @lolmonday @thegrowlerssix

.. so this just happened at the Growlers Six w/ Lydia of the Regrettes. Security didn’t do shit til the last second. She was attacking people. Good job security. pic.twitter.com/DN5vTSvoLz

Night was knocked to the floor before security finally escorted the attacker off stage.

Lydia has since responded to the incident in her own Instagram post, thanking fans for their support and revealing that the attacker was apparently highly intoxicated, according to security:

Being a performer is one of the most vulnerable things you can do. The last thing I want to worry about during a performance is being in danger in any way. The stage should always feel like a safe space for self expression and art. Yesterday, someone invaded my safe space in an aggressive manner and that is absolutely not okay. Thank you for all of your concern and love. I am still pretty shocked about what went down, but I will be totally fine. I did not know the girl who attacked me. I was told she was on a lot of drugs and mistook me for someone else. Love you all and I'll see you next month on the east coast.

The Regrettes were most recently seen in the UK supporting SWMRS on tour. Their debut album Feel Your Feelings Fool! is out now.