WATCH: This Teacher Finding Out Prince Died Is All Of Us 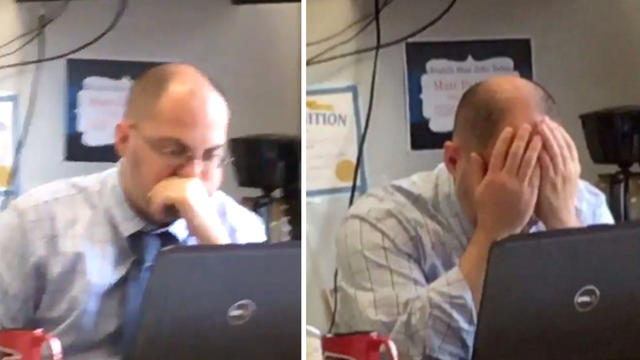 The news that genre bending icon, Prince, had died in his Minnesota home yesterday (April 21, 2016) did not go down well for most of us. Prince's contributions to music and culture left a great many people mourning the legend who truly changed the landscape of popular music.

One such mourner is a Georgia teacher named "Mr.Pat". One of his students, twitter user @shvrdae, captured the heartbreaking moment he found out Prince had died. He can be seen watching a video, removing his glasses, and burying his head in his hands in total disbelief.

When my teacher found out Prince died pic.twitter.com/biNapKWJBU

This probably isn't too far off from how many other people were feeling when they found out the news. Undoubtedly, some of us returned to Prince's performances, like the "Purple Rain" clip Mr. Pat is watching, the shock hitting us like a ton of bricks.

Mr. Pat later tweeted (probably in response to the video of him landing on CNN) that Prince changed his life.

RIP Prince... Thank you for enriching my life. My life has been significantly changed because of your music.

Yeah, we know this feel.

People Are Sharing Heartwarming Stories About How Prince Influenced Their Lives