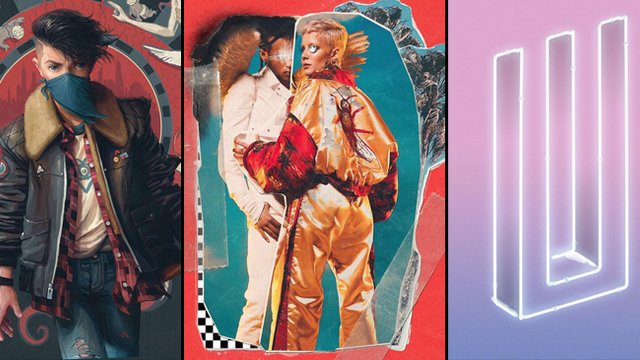 From Paramore to Harry Styles, let's rundown all the best records of the first half of the year.

Well, we are officially halfway through 2017 - where has the bloody time gone eh - and you know what that means? Yep, time for an in depth analysis of the first six months in music and figure just who's album has come out on top.

So, while there are still loads of great records still to come (MANIA this September y'all) we want to know right now which album has tickled your fancy for the first half of 2017.

You've got 17 options to choose from - just swipe right or left to give each song a 'thumbs up' or 'thumbs down' and the total results collected will be displayed at the end.

So what are you waiting for? Decide your album of 2017 (so far) in the vote below:

Here's what the PopBuzz team have picked as their fave albums of the year:

"The success of Stormzy’s Gang Signs & Prayer is easily one of the year’s best musical underdog stories. Despite having no major label backing, Stormzy earned the support of big names (Adele included!) and new fans by releasing a deeply personal and authentic record. It's hard not to root for Stormzy on this release. Alongside his tough talking social commentary, Stormzy explores a side of himself that is unashamedly connected to his faith and doesn't hesitate to reaffirm his status as a mama's boy.Stormzy showcases an accessible side of grime--one where he does a fair bit of singing, borrows from 90s R&B, and promises his mum the world. Gang Signs & Prayer’s success proves that nice guys don’t always finish last. Sometimes they shoot to number 1 and absolutely defy the odds."

"Don't call it a comeback but Paramore's grand return after years of lineup changes, court cases and general uncertainty has been nothing short of spectacular. Fighting pain and sorrow with 1980s-inspired synth joy, the band's fifth record heralds a new era for the group, free of any remaining constraints of their emo past and experimenting with everything from reggae to folk. But the musical focus largely falls on fun, frothy pop, expanding upon the Grammy-winning success of 'Ain't It Fun' with the video game vibes of 'Hard Times' and, perhaps best of all, the stabby, Duran Duran meets Fall Out Boy beats of 'Fake Happy', the defining song of Paramore's fight back against adversity. So yeah, don't call it a comeback, just call it what it is - a pure joy of a listen."

"Thanks to Hopeless Fountain Kingdom (which should have been released as a visual album but that's a rant for another day...), Halsey has singlehandedly revived Baz Luhrmann’s glorious Romeo + Juliet aesthetic and made the world a better place. HFK is the perfect mix of early ‘00s inspired Pop/RnB bangers and those signature melancholic Halsey bops whose lyrics will give you life whether you asked for it or not. Halsey Shakespeare, currently the ONLY female artist to chart at #1 on Billboard's album chart in 2017, has truly served up the complete package this time around. Best track on the album? 'Alone' easily. And even though ‘Walls Could Talk’ is tragically 2 minutes too short than what it should be, HFK is hands down her best yet."

"It may have only came out a week ago but our queen and saviour Lorde delivered a comeback record that has already superseded all the competition in 2017 and left C-rate pop stars pondering the point in their existence. Melodrama is a bold and clever record, full of heart and soul, crammed with pithy lyrics and catchy hooks. Honestly, what more could you want from a pop star? Long may she reign."

"Supposedly crafted within two weeks, it’s hard to believe such a consistently good album could exist at all in 2017, never mind something made in such a short period of time. Yet Charli came through with her gang of features (Raye, Uffie, Starrah, MØ, Abra and CupcakKE) with ‘Number 1 Angel’ to punch 2017 between the eyes and serve up an album which feels like a perfect ode to what it’s like to be a girl right now. The album peaks with ‘Drugs’ (a haunting bop of a track which feels both earnestly romantic and kickass) and ‘Lipgloss’ (a liberating track with a smooth and sweet hook contrasted against CupcakKe’s sour as fuck lyrics). ‘Number 1 Angel’ is what pop music should sound like, and most importantly it’s straight up FUN."

Agree or nah? Cast your votes now and we'll announce the winner soon!