We Met David Guetta In Paris To Talk Soccer Because LOL 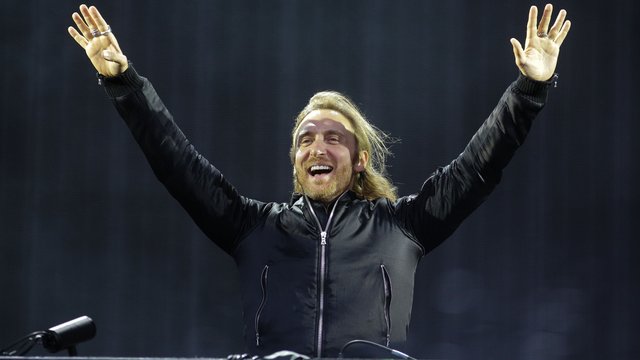 FYI he really wants to work with Adele.

France is good for two things: cheese and David Guetta. And if you combine them both, you're literally in some sort of E-D-AM paradise (sorry not sorry). So when we were invited to chat with the long-haired DJ mastermind in the cheese capital of the world, we couldn't help but say...

Alas, he didn't want to talk about cheese. But he did want to talk about his new song, "This One's For You". It's the official song for the Euro 2016 Football Tournament (that's Soccer, American friends) which will be held next year in France.

CRAZY PLOT TWIST: you can be on the track! Download the app over here and sing a part of the song and you can actually be featured on a certified future banger. Not only that, you get entered into a draw to win tickets to his gig under the Eiffel Tower next June. Much wow, very Guetta.

We got on the magic underwater train from London to Paris. When we arrived, everything seemed so...French? There was an abundance of otters painted on walls of the Metro. Because otters. 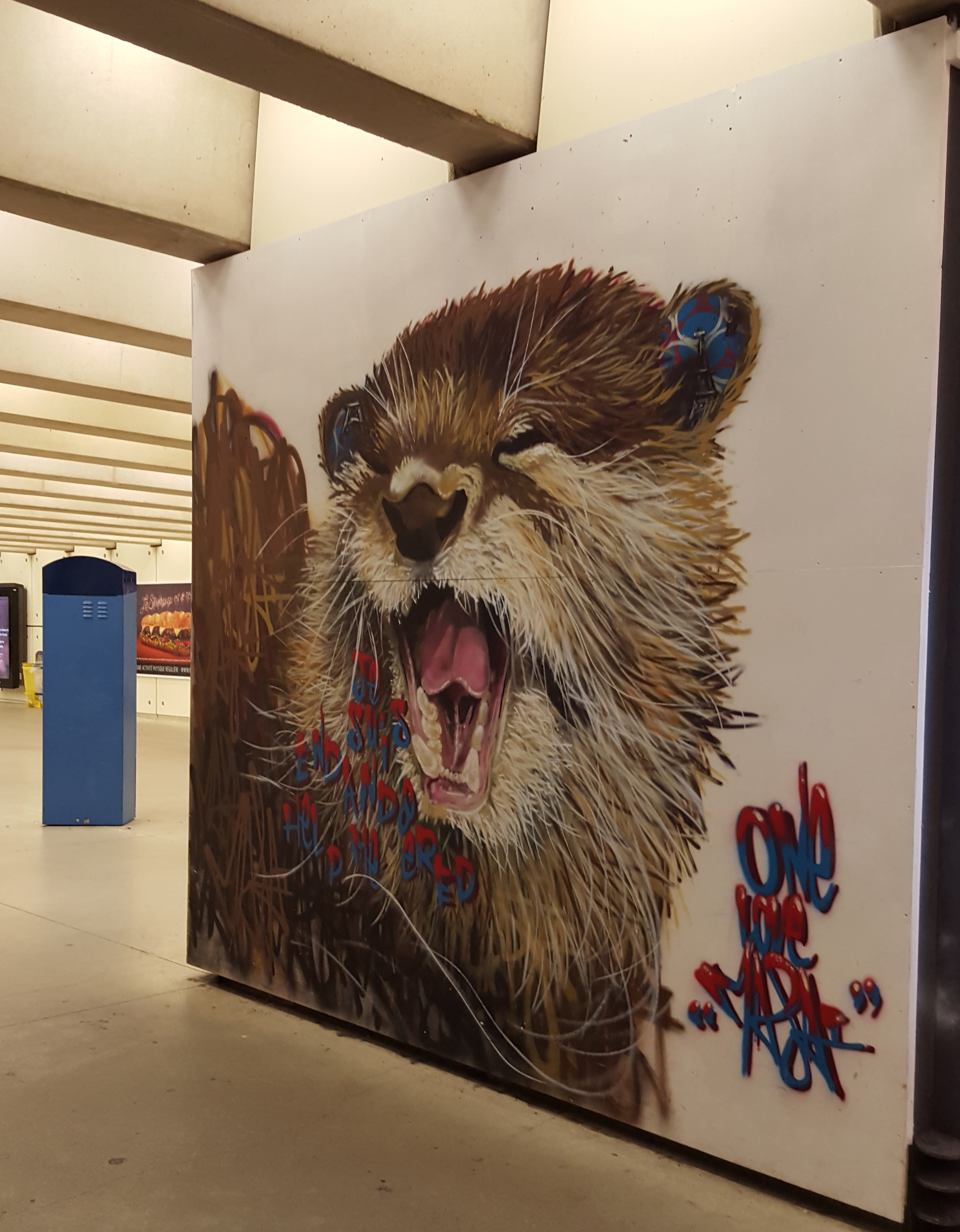 There was a DOUBLE DECKER CAROUSEL. The precious children of Paris are truly living their best lives. 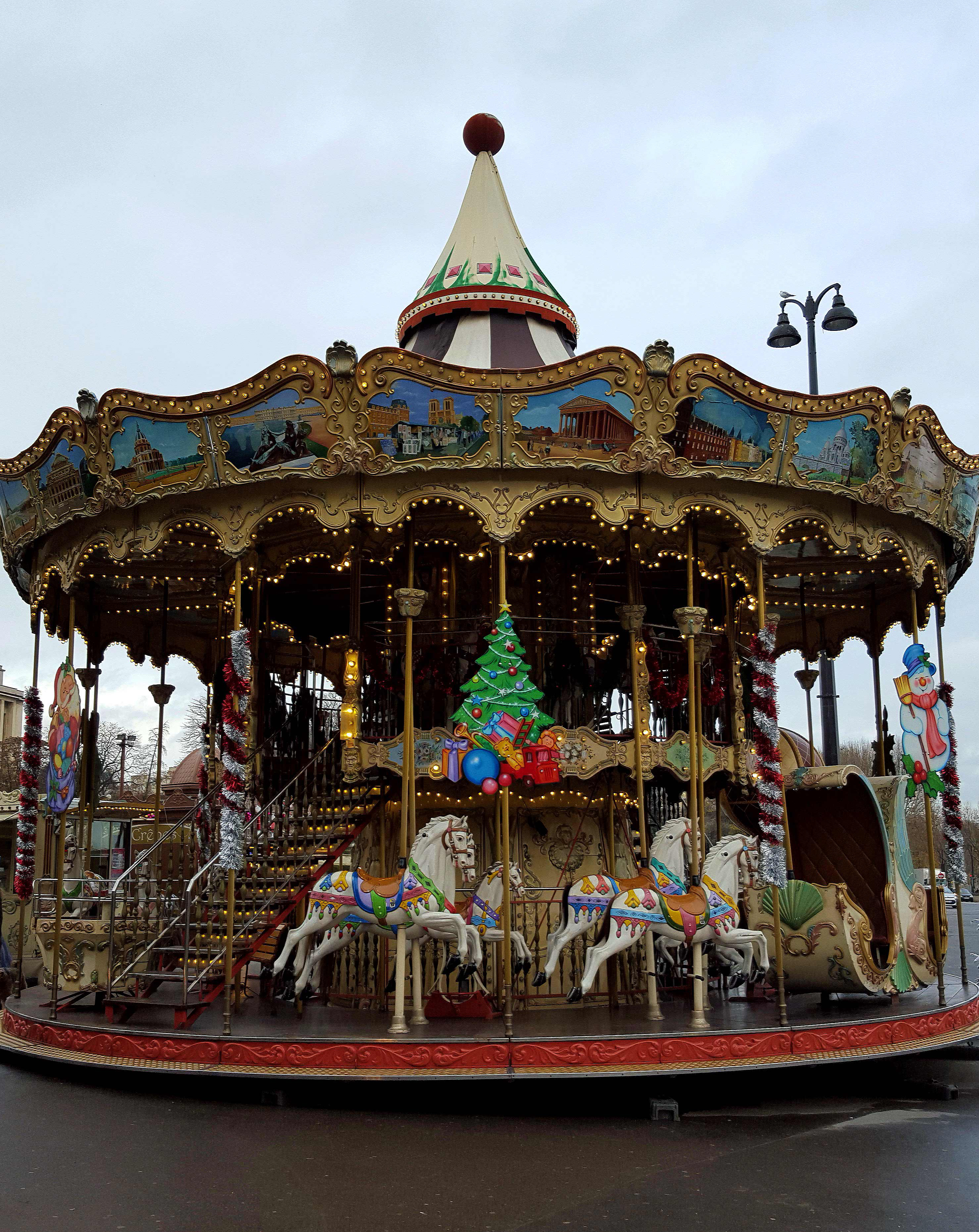 There was also this giant pointy thing which is really famous. 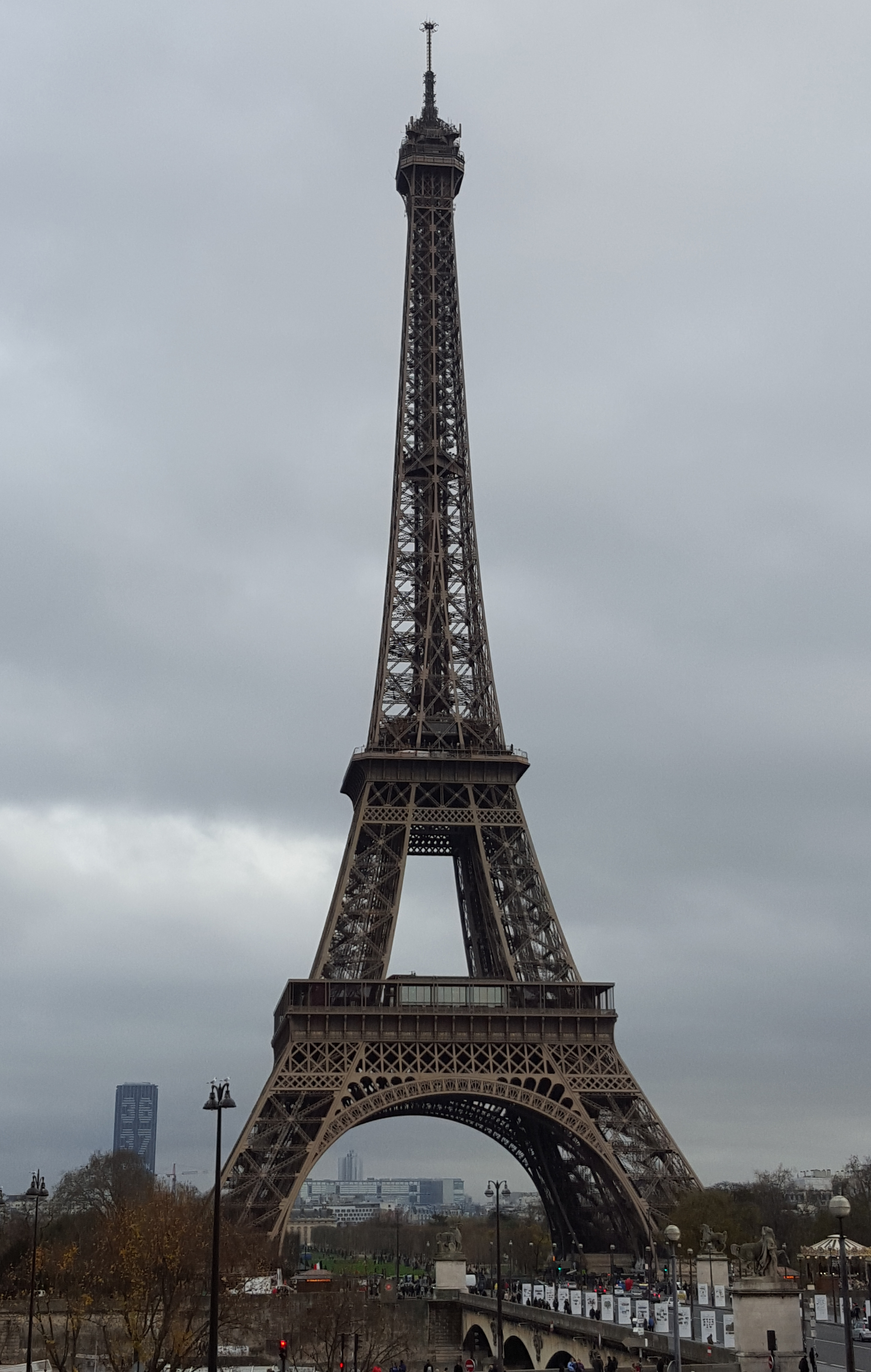 Eventually we found Guetta in a very posh building taking a picture of the tall pointy thing. Let's all take a moment to appreciate his cute lil' man-bun in this pic. 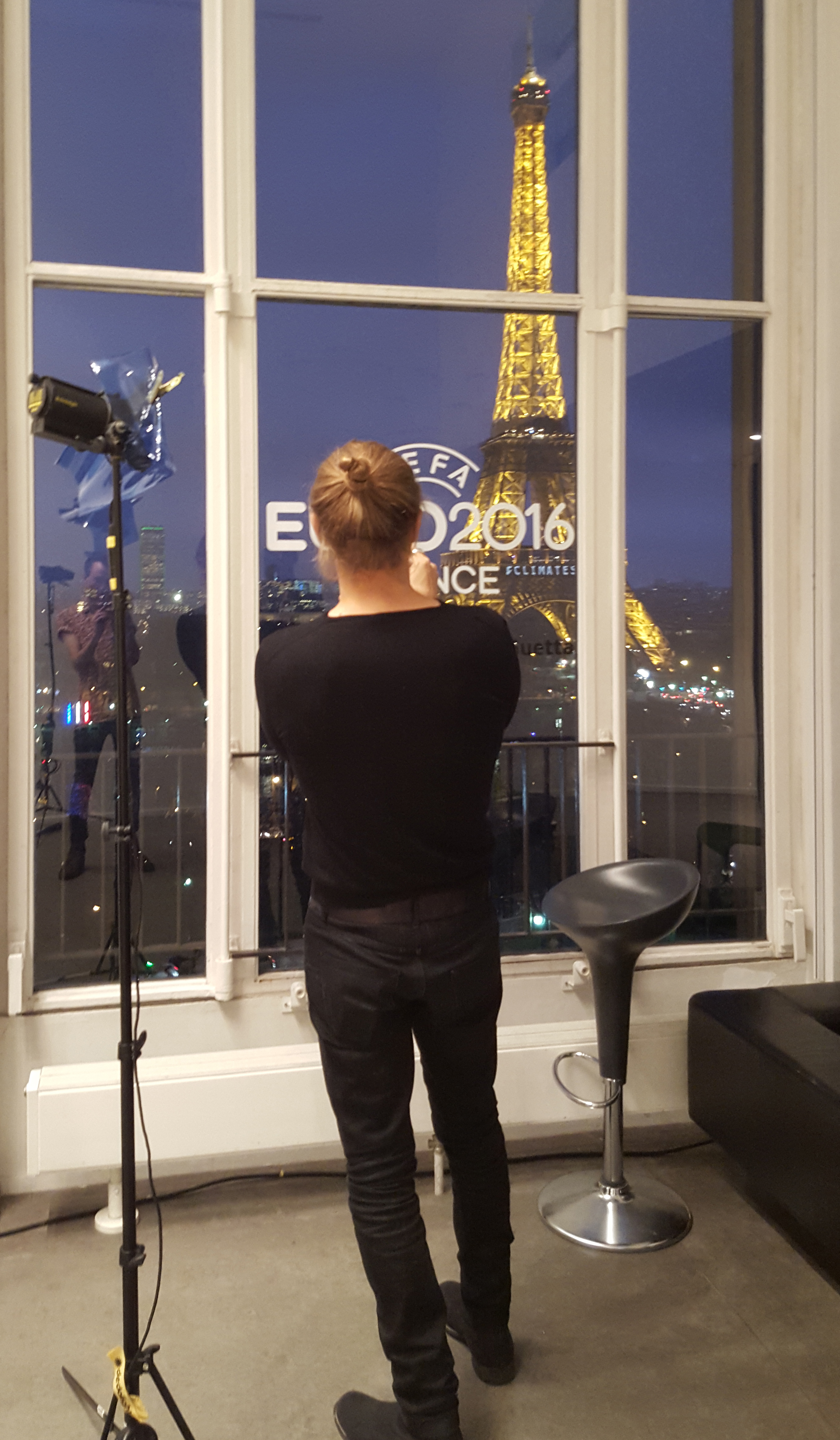 He eventually turned round so we could begin the interview, although I feel we missed a brilliant opportunity for some #GreatContent entitled "Interviewing Guetta from Behind". Just imagine the LOLz. 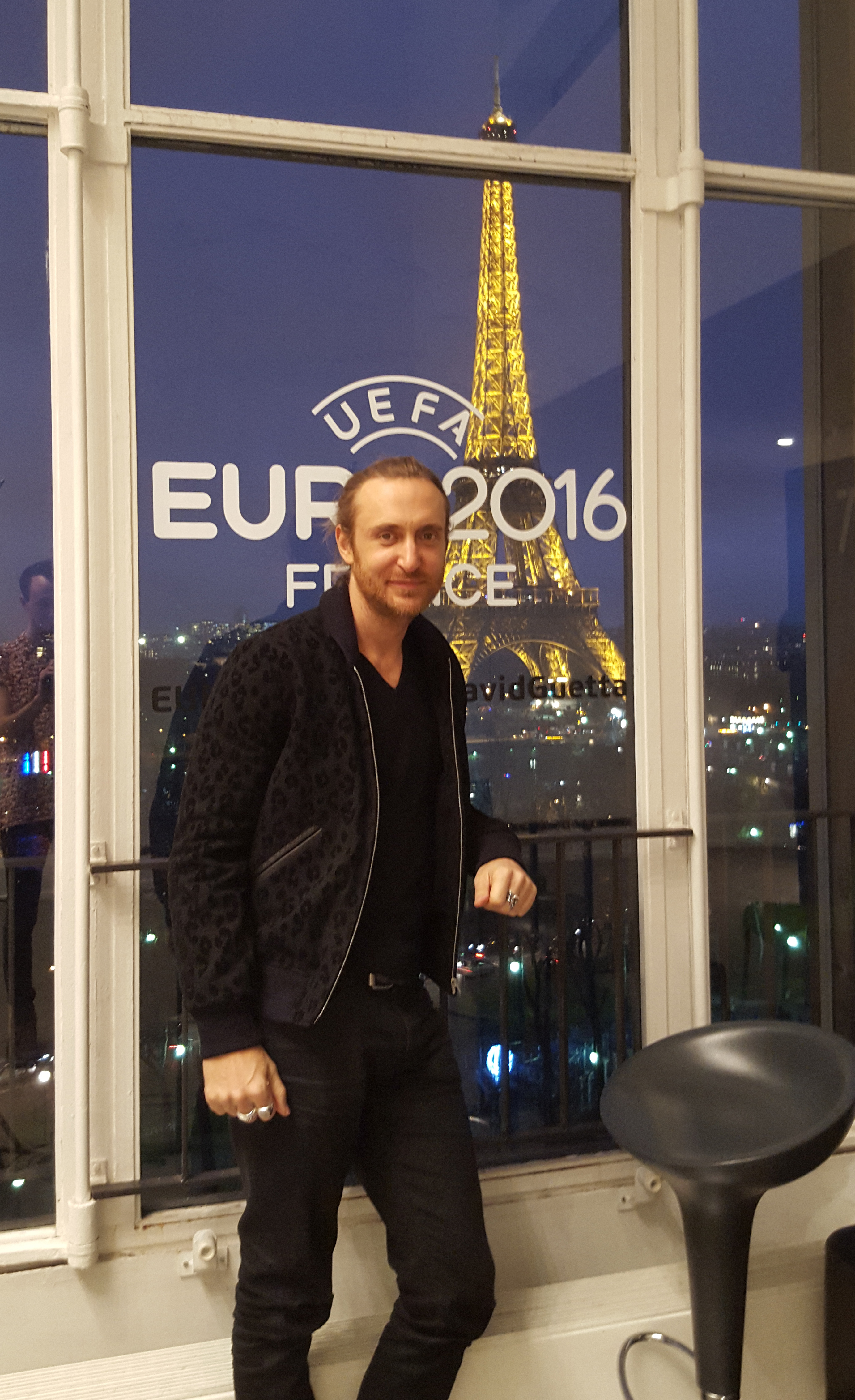 PopBuzz: So tell me a bit about your role as music ambassador for UEFA?
David Guetta: Well, most of all is making the song. When UEFA called me, that's what it was about. Then they decided to make it bigger because at first it was just the song, and then we came up with the idea of not only making a song but having fans to be a part of the song. Everybody loved with idea and we worked on how to do it and some little geniuses created this app where you can record your part. It's quite ambitious but I'm aiming to get one million different people to record and mix all those voices so it's a song that belongs to all of us.

PB: What's the part they are going to sing?
DG: It's a chant.

PB: Oh good. I feared there would be terrible consequences if you let them record anything they want. Will you be working with any other artists on the track?
DG: Yes yes, it's already done actually. We already recorded the song with a very big artist but I can't tell you.

PB: Do you get nervous with big projects like this? It's very different from doing an album or a normal song.
DG: Yeah, of course! Imagine, I'm from Paris and I'm gonna do a concert under the Eiffel Tower. That's pretty huge! It doesn't get bigger than that. The pressure was even more with this...like am I going to be able to nail the record? Because, y'know, sometimes I make a record, it's good, sometimes I make a record, it's not that good and I don't keep it. But to say, okay, I have this one opportunity and it has to be a hit? That's a lot of pressure.

PB: Who would be better in a penalty shoot out: Sia or Fetty Wap?
DG: Oh! Probably Fetty.

PB: Really?
DG: Well, I don't know. Sia doesn't strike me as a big sporty girl. But I might be wrong!

PB: And if you had a 5­-a-­side football team comprised of you and people you've worked with, who else would be on your team?DG: Oh Rihanna, because she's fit! And Akon, for sure.

PB: Wouldn't he get distracted by all the sexy bitches?
DG: (laughs) That might be true! Who else is sporty around me? Kelly Rowland for sure. She would be a huge asset and she's so fit! She's probably the fittest out of all of us. And Usher, I believe in Usher. He could score.

PB: Who would be terrible, apart from Sia?
DG: Nooo!!! [throws his hands up in disbelief] I didn't say she was terrible! You see? These British journalists. They are terrible. You guys are terrible!

PB: I don't know what you are talking about.
DG: Well Will.i.am might get distracted. He might send some text messages through the match.

PB: I agree. He's a liability. Considering you've done so many DJ sets around the world, what's the best party you've ever been to?
DG: Ummm I would name two that are very different. In one, I was already very famous, and I played to two million people in Rio on the beach. It was such a lifetime experience. The other one, when I was starting to be famous, I got invited by Fat Boy Slim to play Brighton beach during the winter. It was raining, like you have no idea. It was crazy and freezing. I started with 4 turntables and, of course, I kept getting electric shocks. One [turntable] stopped, then a second one. I ended up just playing one record and speaking on the mic like a radio DJ while trying to play the other record, but it stays in my memory as one of the craziest parties I've done.

PB: I used to live in Brighton. Those parties got shut down in the end because they got to out of control.
DG: Oh, really?

PB: Yep, it's all your fault. What's the weirdest costume you've seen at one of your concerts?
DG: Well the craziest thing I've seen was when I played in Spain and there was a guy who was so enthusiastic and he ended up being completely naked on the shoulders of his friend. And I was like, really? It was so crazy so I took a picture. The poor guy, he was probably so wasted. I put the picture on my Instagram! I was imagining how embarrassing it must have been the day after, so I took it down.

PB: What's the longest party you've been too?
DG: Oh my god! You know now DJ sets are festivals now are like 90 minutes or two hours? But first I used to be a resident DJ for years and I was playing 8 hours a day, six days a week. You know the Winter Music Conference in Miami? One day I played for 16 hours.

PB: I assume you hadn't planned all 16 hours...
DG: No, that's the difference between club DJs or making a show - and I'm a part of it - what we deliver is a show. It's different from the original concept of club Djing. And at that time I would never prepare the set. It was always improvised. And actually I would always travel with enough records to play for a week.

PB: Was that all on vinyl?
DG: Yeah. I had the whole history of music with me. Absolutely.

PB: (adopt tone of a worried mother) You must have had terrible back ache.
DG: Oh yeah. It's the worst. When I see DJs that still want to play vinyl, I really don't get it. It was so painful! If there is one thing I don't regret, it's that I don't have to carry all those records anymore.

PB: Who's next on your list of artists that you'd still like to work with?
DG: Well I have to say I'm pretty impressed by Adele. I doubt very much she would do it because I'm too much in the dance category, even if I can do different types of music.

PB: She's had a lot of remixes though, so maybe?
DG: Oh yeah, remix for sure, but making something together is different. Her first song, like, oh my god! OH MY GOD! The first time I heard it I was like, 'Wow!" It's incredible.

PB: And who should we be looking out for from France?
DG: French-­speaking? I think Stromae. He's actually from Belgium and he's extremely talented and of course you wouldn't understand the words but he's also an amazing writer; it's like poetry.

PB: And what was your favourite album of 2015?
DG: Adele. No wait, I take it back. I have to be honest with this, because you always tend to love the latest one, but Jack Ü. Amazing. I was like, "Wow." And I didn't feel wow about electronic music for a while, so to be impressed by this production, I was like, this is really special.

PB: I was going to ask about your favourite DJs this year, but I guess it's Diplo and Skrillex?
DG: For sure, Jack Ü were the most exciting producers. There is absolutely no doubt. Also I think when it comes to the performance, they kill it. And they party. I like that. They are credible DJs that don't take themselves too seriously. I like that.

PB: So what's up next year?
DG: I will be making music as usual. I was in London for a month to work on music, and right after this week we are going to do the draw, and then I'm back to the studio in Paris. That's my life, that's what I do.

David Guetta brings you a 30 second exclusive of the Official Song of #EURO2016!Want to be on it? Record online now: bit.ly/Guetta_EN#ThisOnesForYou