19 New Songs You Need In Your Life In February 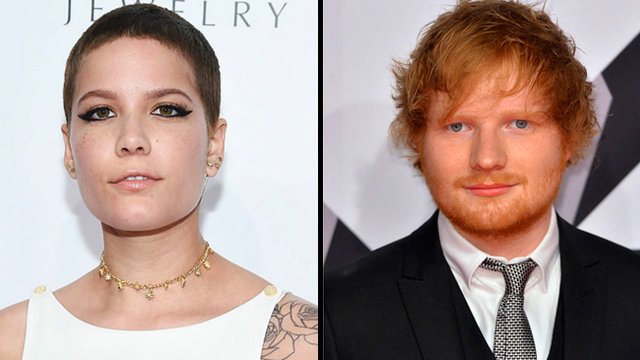 Did you know that every month PopBuzz rounds up its favourite new music finds and puts them in a highly enjoyable and easily digestible list? Well, we do and guess what? You're reading it now! What are the chances?

While the world was quickly turning to ash before our very eyes in January, the first month of the year did at least leave us with a legacy of brilliant music. Check out new tunes from the likes of Halsey, Ed Sheeran, LANY and Zara Larrson below and don't forget you can listen to most of these 24/7 on PopBuzz Radio. Okay on 3, 2, 1...

Okay we are VERY FUCKING LATE to the game with Amy Shark so let us make amends by opening this year's new music round up with this glorious track. It's a moody, downtempo number about "crushing hard on someone", Amy wrote on her Soundcloud. "Hopefully it gives you all a serge of confidence to go ahead and make a move." Consider this your mission, to make a move on your crush this weekend. You go first though...

Can I make a personal confession, dear reader? I have always hated Ed Sheeran's music and I think Rihanna would've done a much better job on this song. But...I mean... it's too damn catchy to ignore. So I'm all aboard the Ed Express (unless he writes more like 'Castle On The Hill' - otherwise he can do one).
Listen on PopBuzz Radio

If you like Garbage then you should probably listen to this lying down cos you will almost certainly faint at just how well this song pays homage to their golden period in the 90s. It's banging. Proper banging.
Listen on PopBuzz Radio

It's Halsey, on the Fifty Shades Darker soundtrack. Need we say any more? Listen on PopBuzz Radio

Melanie Martinez stans sit the fuck up right now. You're going to love Julia Michaels. Having only one song to her name, she has already hit the 16 million mark on Spotify but a quick look at her Wiki page shows she's no stranger to the industry, having written half of all your favourite songs from the last two years. Expect to see Julia pretty much everywhere in 2017.
Listen on PopBuzz Radio

Yeah yeah yeah this song was released ages ago but, guess what, it's bloody good and there's a new video so DEAL WITH IT, ALRIGHT!?!
Listen on PopBuzz Radio

7. London Grammar - Rooting For You

If crying is one of your favourite pastimes then London Grammar are here. for. you. The follow-up to their massively success If You Wait is out later this year and 'Rooting For You' is making us moist (round the eyes) with the possibility of their return. Welcome back, LG!

After knocking seven shades of shit out of everyone on 'Work For It', new single 'Boomerang' finds Lower Than Atlantis exploring mellower territory and it's probably the best pop-rock song you'll hear all month. Head to our FB page today to watch the band answering questions live about their new album.

British MC Loyle Carner holds the honour of releasing the first brilliant album of 2017 thanks to his debut Yesterday's Gone. We named Loyle as one of our Ones To Watch in 2017 and he hasn't disappointed. This jazzy number with Tom Misch is one of the record's highlights. Get to know him before everyone else does.

How do you follow a viral sensation like 'Alaska'? Well, if you're Maggie Rogers, you release 'On + Off'. The 22-year-old multi-instrumentalist will release her debut album Now That The Light Is Fading on 17 Feb and we can't wait!
Listen on PopBuzz Radio

11. MUNA - Crying on the Bathroom Floor

MUNA pretty much had us at "queer LA girlband" but then they released this pulsating electropop banger. There was only one thing for it...we quit our job, put all our stuff in storage and joined the MUNA mercenaries to help them achieve world domination. DM us if you wanna join the cause.
Listen on PopBuzz Radio

There is something very 'London' about ROC, in the same way Amy Winehouse and King Krule could only have come from the capital (although Rex is originally from Surrey, which is pretty close by tbf). On 'Best Friend', 18-year-old Alex O'Conner has his sights set beyond London. His DIY charm and troubadour romanticism really hit the sweet spot on this one. If Rex isn't a big name by the end of 2017 we'll eat all our hats, shoes and a couple of scarfs too.
Listen on PopBuzz Radio

Salën are back-at-it-again with the good tracks on 'Heartbreak Diet' which lists-off the emotional absurdities of heartbreak, including amazing one-liners like, "I used to imagine myself dying so you would cry at my funeral", which is the most stupidly weird and true thing we've ever heard. Also, why does the beat on this song remind us of 'Mysterious Girl'? Anyway, 10/10, would listen again.

Not only is this a fantastic song title, but it's also one of the most wonderfully understated, and beautiful, piano ballads we're heard in a long time.  Someone call up Sam Smith and tell him this is how it's done. Sampha's new album, Process, is out this month on XL.

Give me all the glitter you've got and let's throw a party. Lorde and Katy Perry-approved, Skott, serves up a slice of dark glamour on 'Glitter & Gloss' and we're actually hooked. This is pop music at it's shimmering best.

"Johny, can you hear me?" There is something so delightfully dark about the way Sophie Hawley-Weld asks this question on 'Johny'. Has Johny passed out? Has Johny done a runner? Is he, like, okay? Considering the song is in Portuguese and we're too lazy to use Google Translate, I guess we'll never know.
Listen on PopBuzz Radio

If you haven't put the whole of The Internet's Ego Death of your sex playlist we honestly feel sorry for you. The band's lead vocalist, Syd, goes solo on this R&B jam and it continues The Internet's M.O of making everyone sweat. *infinite sweat emojis*

Rave-loving goths The xx returned with their third album last month and it's...good. But this moment, where Romy takes the lead, is the record's most poignant, and finest, moment. Expect a lot of dry ice on this one when the live shows comes around...

Zara just dropped a summer bop in January. What the fuck is going on? Mind you, Sia dropped 'Cheap Thrills', a tropical summer bop to end all tropical summer bops, in February last year and that basically didn't leave the charts all year. We see you, Zara, we see you...
Listen on PopBuzz Radio.